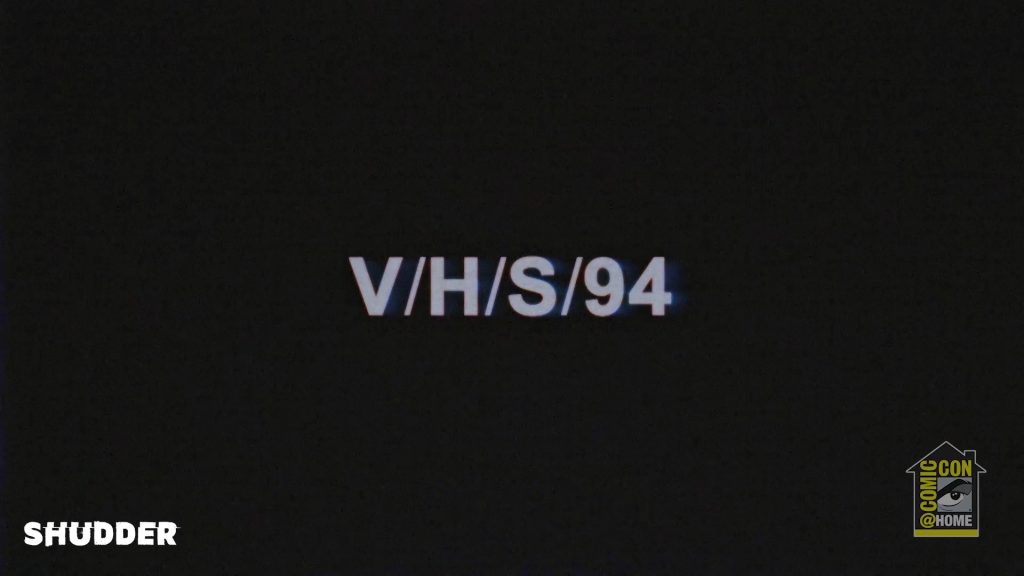 The fourth installment of the found-footage V/H/S/ series, V/H/S/94, is set to premiere on Shudder this fall. But today, ahead of its upcoming release, the producers and filmmakers came to Comic-Con. In their panel, they talked about the overarching story, each filmmaker’s respective segment, and what it was like to embrace the aesthetic of 1994 for this new film.

Every V/H/S film has been a collection of short, mostly stand-alone anthology films. But, for the first time in the franchise’s history, V/H/S/94 will feature a collection of short films that all build toward one larger story. According to Shudder: in V/H/S/94, after the discovery of a mysterious VHS tape, a brutish police swat team launch a high-intensity raid on a remote warehouse, only to discover a sinister cult compound whose collection of pre-recorded material uncovers a nightmarish conspiracy.

For producers Josh Goldbloom and Brad Miska, this meant finding a way of connecting all the segments together in a way that still gave the filmmakers the freedom to experiment with different found-footage genres. According to Miska, the concept was initially a series, but they reworked it into a film. There was a desire to do something different with V/H/S/94 than what they’d done with the previous three. Though, this proved challenging. There will be some crossover between the segments of different characters, locations, and little hints and Easter eggs. Part of that connectivity also comes from the film’s embrace of 1994’s aesthetic. The filmmakers shot many of the segments at 29 frames per second (like VHS tapes). They also used filters and tape transfers to give the image an authentic VHS look.

What to Expect from Each Segment

As usual, each writer/director tackles their own segment of V/H/S/94. Jennifer Reeder directed the wrap-around story and hopes to buck the trend of those segments being the most disliked of any V/H/S film. Her segment revolves around a “daffy SWAT drug unit that enters a warehouse expecting to find a super lab”. They find something, but not exactly what they’re looking for. Instead, they find “a kind of contraband much more deadly than the sort of typical drug on the street.”

Simon Barrett’s story takes place in a funeral home. He describes its plot as: “a new employee is asked to officiate an overnight wake and record the proceedings for the deceased’s memorial video”.

Chloe Okuno’s segment revolves around a TV reporter investigating a local legend. She and her cameraman are looking for a mysterious figure known as “The Rat Man”. Their investigation takes them into a storm drain where, according to Okuno, things quickly unravel.

Ryan Prows’s segment is called “Terror.” It’s about “lovable militia goofs” who get their hands on a supernatural element. An element they plan to use as a weapon against the US Government. And, according to Prows, “scary hilarity” ensues.

Timo Tjahjanto’s is titled “The Subject.” He says it focuses on a “Doctor Frankenstein-like mad scientist who’s creating this ‘experimental creature’. And all hell breaks loose when a bunch of cops enter the facility and start to execute their own brand of justice. It’s going to be a cat and mouse between something inside there and these cops.”

A release date for V/H/S/94 hasn’t been announced just yet. However, you can watch the entire V/H/S/94 panel, including a special Sneak Peek clip, below: