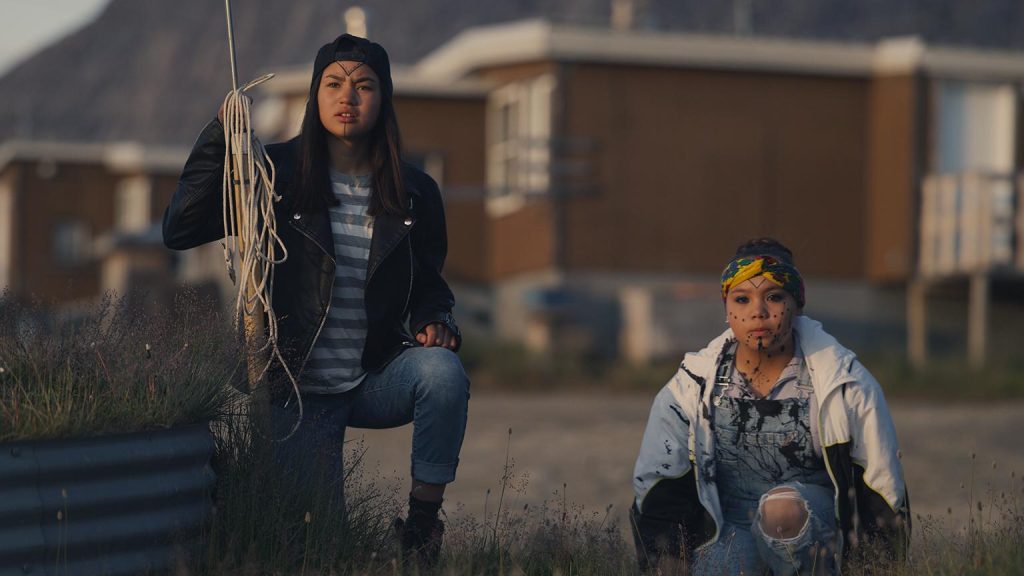 If you watch horror, chances are high that you’ve come across a string of films that pervert Indigenous cultures into a threat or dark force. The most consistent offender is some version of the “Indian burial ground” in American horror. That trope pops up everywhere from The Amityville Horror (1979) to  Buffy the Vampire Slayer (1997-2003). It is lazy writing wherever it’s used, and consistent with the damaging history of using “Otherness” to generate fear. I bring this up because it gets to the heart of an ongoing conversation about who gets to make movies. In essence, if more Indigenous creators actually had a say in these films there would be fewer white filmmakers with perverse opinions perpetuating these approaches. With that in mind, I turn to Nyla Innuksuk’s phenomenal Slash/Back (2022), a horror-tinged science fiction film that joins the growing ranks of Indigenous filmmakers reclaiming the genre.

Set in Pangnirtung, a.k.a. “Pang,” Nunavut, Slash/Back’s story swirls around a group of teenage girls. They are all born and raised in Pang, and apart from Uki (Nalajoss Ellsworth), cannot wait to find a way out of their sleepy town. When Maika (Tasiana Shirley) convinces the crew to take her father’s boat for a joy ride out to the foot of the surrounding mountains, the girls encounter a sickly polar bear that attacks Maika’s sister. While she is uninjured, the polar bear’s odd behavior sets Uki, the only one who believes in the local folklore, on the path to figure out what’s going on. What she discovers is a mysterious alien object that turns animals and humans alike into corrupted creatures out for blood. The discovery drives Uki, Maika, Leena (Chelsea Prusky), and Jessie (Alexis Wolfe) to set out on a hunting trip to save Pang.

The film’s opening sequence in the snowy reaches of the north beyond Pang features a geologist meeting his doom from the same creature that ends up terrorizing Maika and her friends. It is reminiscent of John Carpenter’s The Thing (1982), something that Innuksuk nods to when Jessie raves about the film to her friends later on. It’s a big swing to double-down on connecting your movie to a genre heavyweight, but Innuksuk proves to be a filmmaker up to the challenge. Much like Carpenter before her, she leans into the remoteness of the setting to build unease. However, where Carpenter marooned his character in the arctic, Innuksuk foregrounds the way that Indigenous communities are forced to fend for themselves, hammered home by a condescending and threatening white cop. Such framing adds heightened plot stakes. We don’t just worry for the girls: we know that they are the town’s only hope.

It helps that Slash/Back features truly gnarly special effects when it comes to the aliens. Designed as tendrils that burrow inside and take over organic beings, the post-conversion creatures are triumphs of practical effects. One poor man who is the first human casualty looks rather like an ever further distorted Leatherface. Skin hangs off the head, limbs creak at odd angles, and when it attacks, fanged tendrils erupt in search of blood. Innuksuk does not even choose to set the action at night so shadows could smooth out any possible rough patches in the effects. All the action takes place in broad daylight, amplifying the body horror bound to these cosmic assailants in human form. Innuksuk pulls from the likes of Night of the Living Dead (1968) and Invasion of the Body Snatchers (1978) while composing a series of chases and fights around town, each showcasing the girls’ skills.

The cast of teenagers is composed of first-time actors, which is a bit of a double-edged situation here. On the one hand, their greenness to the craft undercuts some of the more emotional beats where they can’t quite sell the scene. Yet, when they are just hanging out they bring a natural ease to the dynamic that is simply wonderful. Thankfully, they are also all adept at the physical demands in their roles which means the third act fires on all cylinders. They may not be the most technically talented group of actors, but they have a genuine charm and are impossible not to route for as they turn their scrappy group of angsty teenagers into a badass squad of alien fighters. As Jesse says at one point, “don’t fuck with the girls from Pang,” and at the end of the day, Slash/Back delivers on the sentiment.

Underneath all of this stellar crafting is a thematic subtext both simple and bracing. Here is a group of Indigenous girls fighting off an alien threat that wants to take over their home. Hammered home by Maika’s “No Peace on Stolen Land” emblazoned jacket, Innuksuk and company made a film engaging directly with the history of white colonists stealing land and massacring native communities. Taken all together, I can’t think of much more to ask of from Slash/Back. It’s a film style to spare and something vital to say.

Slash/Back was viewed in the Narrative Feature Competition section of SXSW 2022.