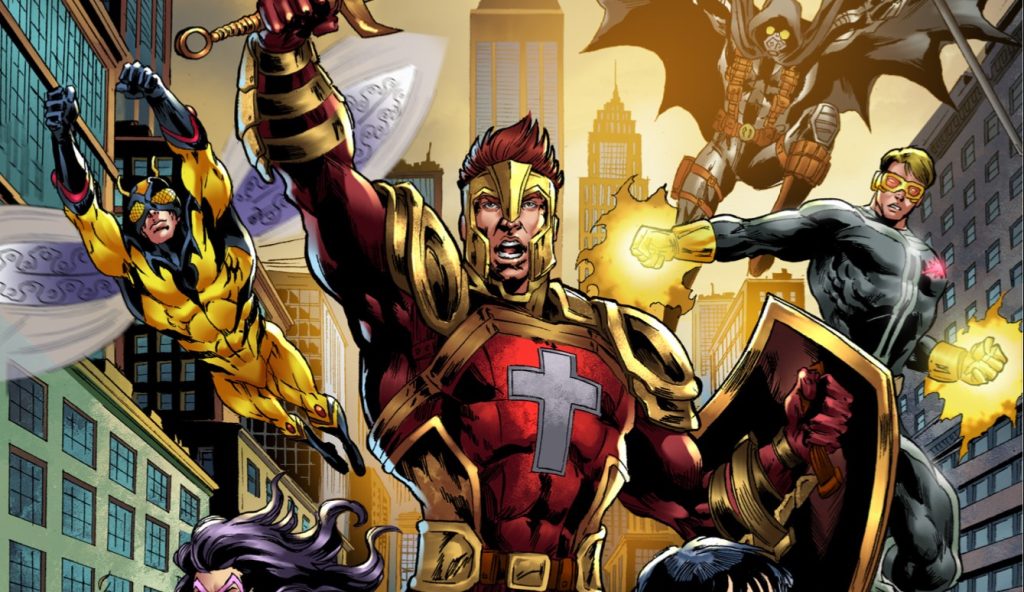 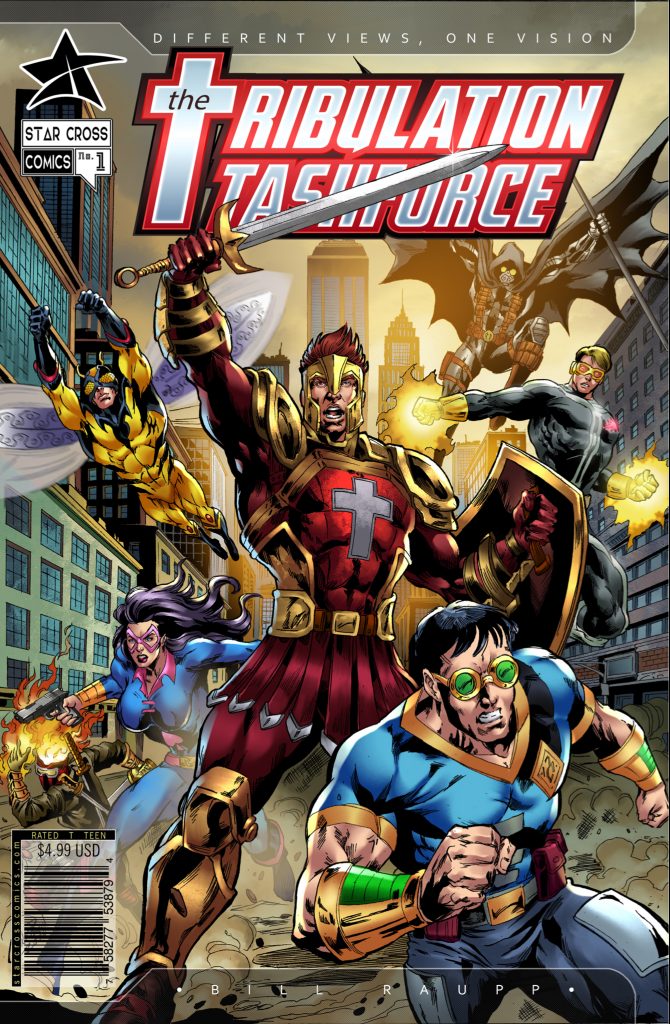 Anyone who has read the Bible or went to Sunday School have heard the different stories of the Bible. Noah, Moses, Samson, David, Goliath and so many others to young ears sounded almost like Superheroes. Characters with great strength, wisdom, and courage. Because of this, it is no surprise that creative minds might adapt these kinds of characters into a comic book. For Star Cross Comics and the creative team of Bill Raupp and artist Olaf Orig, they chose to adapt the Apostle John into a story that combined more traditional style heroes and Bible references. It is unique and a nice mix of the two. So let’s look at The Tribulation Taskforce #1.

In this story, the Apostle John had been one of Jesus most trusted disciples and the longest lived. As we find out, that long life had extended to current times. But he had been held in stasis by a vast array of religious leaders who all demanded the same thing from him. A pledge of loyalty to whatever they called the Catholic Church that was in power at that time. Every time John refused and he was put back under, with the hope that one day, he would. During his recent sleep, the Lord spoke to John. He praised him for his faithful service and told him his next task was approaching. In time, he would be tasked to help those who lived now. A man named Krok would come for him. Together with others, John would lead them in a righteous battle.

So just as the Lord had stated (did you think anything else?), a group of heroes soon arrived at the Vatican where John was being held. Seven of them to be exact. Raytheon, Tek:9, Bzzt, Thief in the Night, Pink Spade, Flameshot, and Grok. Their plan was laid out. They had sent Flameshot in first, but he had ran into a slight problem. So team one was to go to Flameshot. Grok was to liberate the Apostle, and Raytheon was being held in reserve. 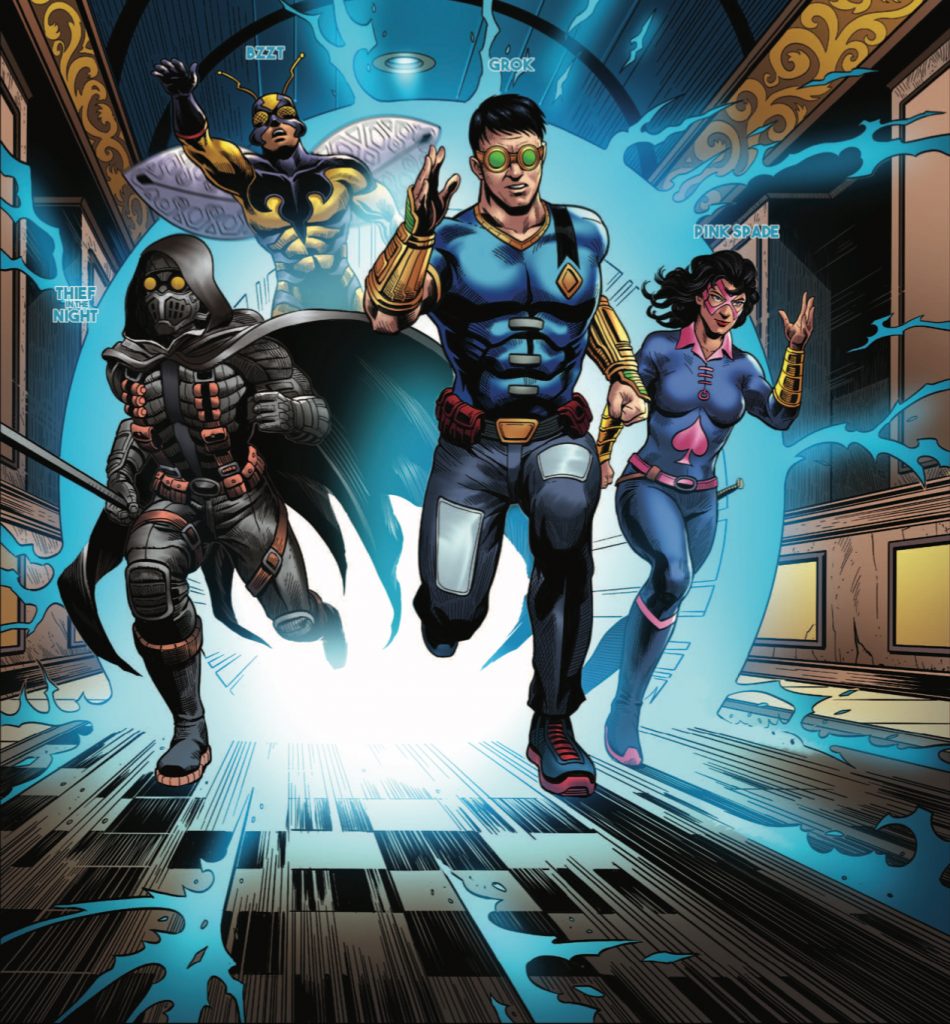 Grok reached his destination without impediment and awoke John. Of course, the Lord had already foretold Grok’s arrival so John was not surprised. However, the portal that brought the team here was created by Grok and he was too spent to create another one. They would have to make a run for it. But before they made the attempt, Grok supplied the Apostle with a suit to do battle in and he cut quite a figure in the red and gold armor.  As the guards approached, Grok prepared to battle but John detected something odd about their adversaries. John extended his sword and cast out the demons that were controlling the guards. They dropped to their knees as their apparitions escaped from their bodies.

Meanwhile, Team one found Flameshot, laying flat on the ground. Fortunately, he was not hurt. But before they could make a move to exit the room, the guards arrived. Not like they actually thought they were going to complete this excursion without some kind of fight. And they were right. This was the more traditional type of fight. Punches, kicks and more punches rang out through the room as well as gunfire and metal rods banging off of armor. Soon Grok and the Apostle John arrived to the fray. Once again, John exorcised some of the demons but not all of the guards were so afflicted. Fortunately, their backup arrived as Raytheon lit up the room with a blinding light as Grok, who had regained his power, transported them away. The guards found themselves alone. Not good for them.

Once they got away, only then did the rest of the team realize they were actually with him, the Apostle John. Many were awed, most were honored, and Flameshot alone recognized the obvious, John was very old. Nothing gets by Flameshot obviously. The greetings over, the team went back to their base. But they had left some things to be explained back at the Vatican. A messenger explained what had happened and that they had lost John. But before he could finish the report, the “Pope” was visited by his “lord.” The man known as Appolyon expressed his disappointment in the chain of events. Now, he would need to repair the damage that was done. As he left, he warned the Pope that if such mistakes were made again, a NEW Pope would be appointed.

The Press reported the incident at the Vatican as a terrorist attack. But fortunately, the Pope was unharmed. However, the attack showed that a different type of security would be required to combat such groups. This was revealed at a televised UN Security briefing as the world was introduced to the Watchers. As the Adventure continues… 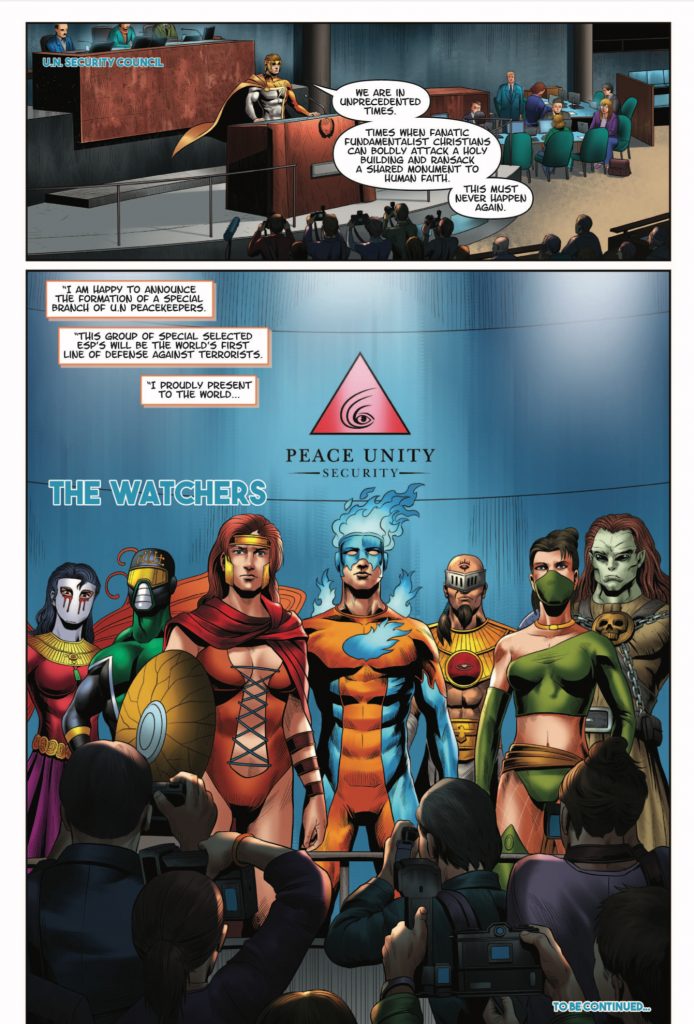 We at Geek Vibes Nation always love to promote creative efforts outside the mainstream. Mainly because experience has shown us that quality can be found everywhere. The Tribulation Taskforce is no exception. Writer/Creator Bill Raupp does a nice job of bringing some of the history of the Apostle John and blending it into a contemporary superhero based genre. He does this while not overwhelming the reader with too many theological references and allowing some of the fun of comics to shine through. The comment from Flameshot about John’s age is testament to that. It’s a nice start to what looks like a fun series.

That same attention goes into the artwork as Artist Olaf Orig does an impressive job of bring the story to life. He displays a great understanding of storytelling and panel usage with clean, energetic lines and dynamic character angles. Oh, and the Apostle John’s armor rocks. Overall, it is an impressive first issue. If you like to support indie comics, be sure to check this one out.🖖🏻