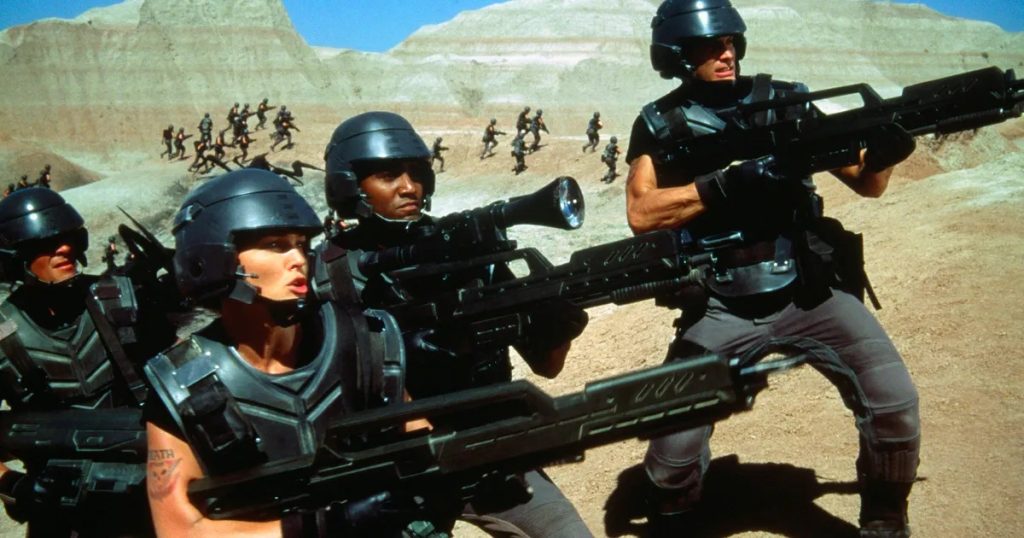 From the bridge of the Fleet Battlestation Ticonderoga, with its sweeping galactic views, to the desolate terrain of planet Klendathu, teeming with shrieking, fire-spitting, brain-sucking special effects creatures, acclaimed director PAUL VERHOEVEN crafts a dazzling epic based on Robert A. Heinlein’s classic sci-fi adventure. CASPER VAN DIEN, DINA MEYER, DENISE RICHARDS, JAKE BUSEY, NEIL PATRICK HARRIS, PATRICK MULDOON, and MICHAEL IRONSIDE star as the courageous soldiers who travel to the distant and desolate Klendathu system for the ultimate showdown between the species.

For thoughts on Starship Troopers, please check out our discussion on The Video Attic:

The new 25th Anniversary 4K UHD Blu-Ray of Starship Troopers offers a tremendous uptick in quality over the accompanying Blu-Ray that was very impressive when it was first released years ago. The film was already released on 4K UHD Blu-Ray five years ago, but I do not have access to that release. From my understanding, that release is very pleasing, but it is known to be one of the early Sony “light cannons” which really went for broke with the brightness. As has become a trend in the past year or so, Sony is revisiting many of these older titles which only included HDR10 and adding Dolby Vision, which can often tidy up encode issues in addition to more vivid colors and stable highlights. Sony has taken a gorgeous 4K transfer and leveled it up to greater heights.

The main draw of this transfer is in the implementation of Dolby Vision for full mastery of the color spectrum. The HDR really harnesses the visual splendor that Director Paul Verhoeven has on display in tandem with Visual Effects Supervisor Phil Tippett and features it to its full potential. The Dolby Vision is strangely not dynamic, but the set standard does actually make the picture come alive all the same. The intensity of the brightness is toned down while never seeming lacking. The highlights are pure and balanced with no instances of blooming to be found. The black levels are downright perfect, staying deep and inky with great detail. Colors are rich, natural and accurate in accordance to what was intended by the creative team. Even the more earth-toned colors such as the dusty brown of other planets look replete with nuance.

This transfer retains the spectacular film grain that resolves perfectly without being clumpy or unnatural. This is a very grain-heavy film, but that is in line with how the film was shot and has not been scrubbed away. There are some complex gradients that hold up famously without succumbing to loose grain or banding. As is typical with Sony, there has been no digital tinkering on this transfer, so this disc is free of DNR, compression artifacts and other encode issues. Skin tones appear so much more natural than the Blu-Ray with magical instances of fine detail apparent on faces such as pores.

The production design and gory makeup that is a signature of this experience is presented with perfect clarity and immense depth. Even the special effects stand out as very detailed and believable, which is a bit rare from this time period and stands as a testament to the craft work. The costumes and textural output of the scenery is simply marvelous to behold with everything rendering without any issues. This is a jaw-dropping  transfer that offers up a virtually flawless presentation that should please fans of the film. 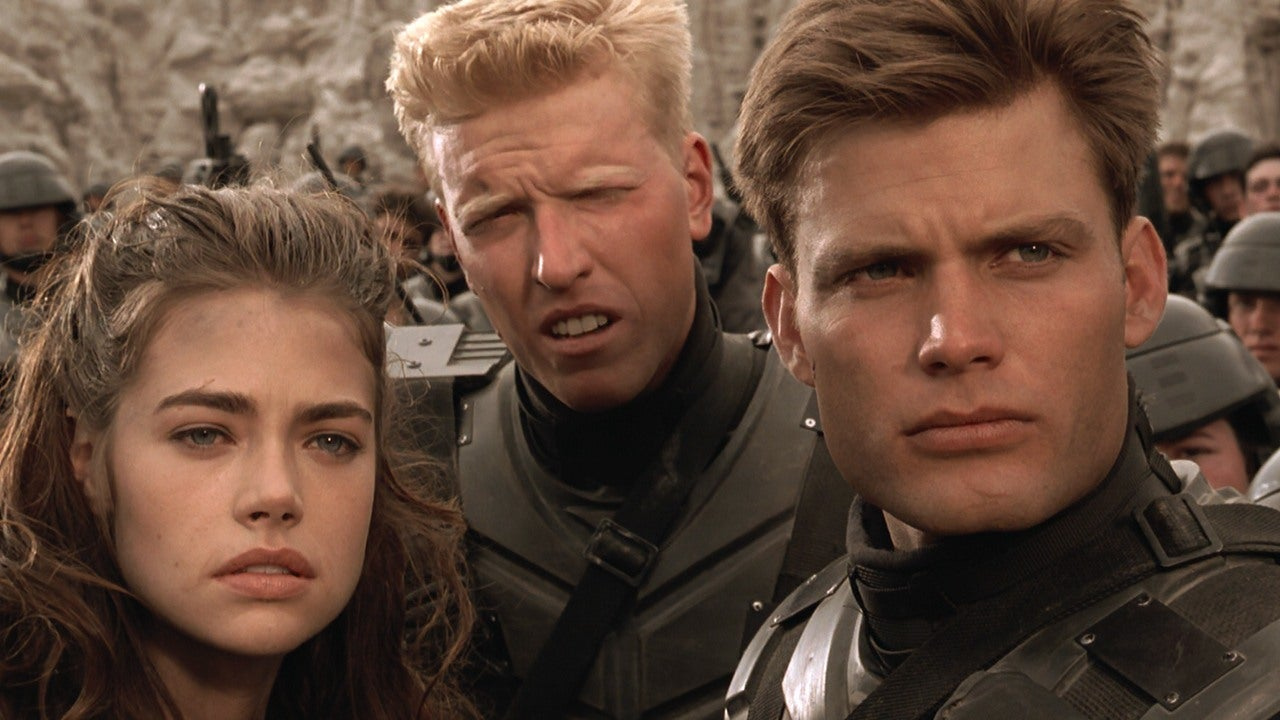 This 4K UHD Blu-Ray ports over the previous Dolby Atmos track that gives the film an immersive soundscape with a real vitality, along with the original soundtrack in glorious lossless DTS-HD 5.1 Master Audio. Both of these tracks are glorious in their own ways, but we love when Sony provides a choice for fans who want one. Those who choose to embark with the original track may not utilize every speaker at your disposal, but you will be granted a complex, natural sound without any age-related flaws. If you choose the Atmos track, strap in for one wild ride.

The Atmos track places a natural emphasis on the front channels for dialogue and other unique sounds, but activity seamlessly extends to the surrounds, rears and overhead speakers to make the world feel more robust and all-encompassing in a way that you require for this type of narrative. The sounds up above are steady and make you feel as if you are in the thick of the fight with the bugs. The shrieks of the bugs flying across the landscape will likely send a jolt up your spine. Atmospheric sound effects are rendered appropriately within the mix so that directionality is never an issue.

Dialogue is crisp and clear without ever getting overshadowed by the triumphant score or sound effects. The low end effects from the subwoofer give most moments that necessary extra weight to enrich the experience. The film really satisfies when it comes to the thematically appropriate score which flows through in a really enveloping manner. The original DTS-HD 5.1 track is not quite as all-encompassing as the Atmos track, but it handles the material every bit as much as you would want with power and stability. Sony has knocked it out of the park with both of these. 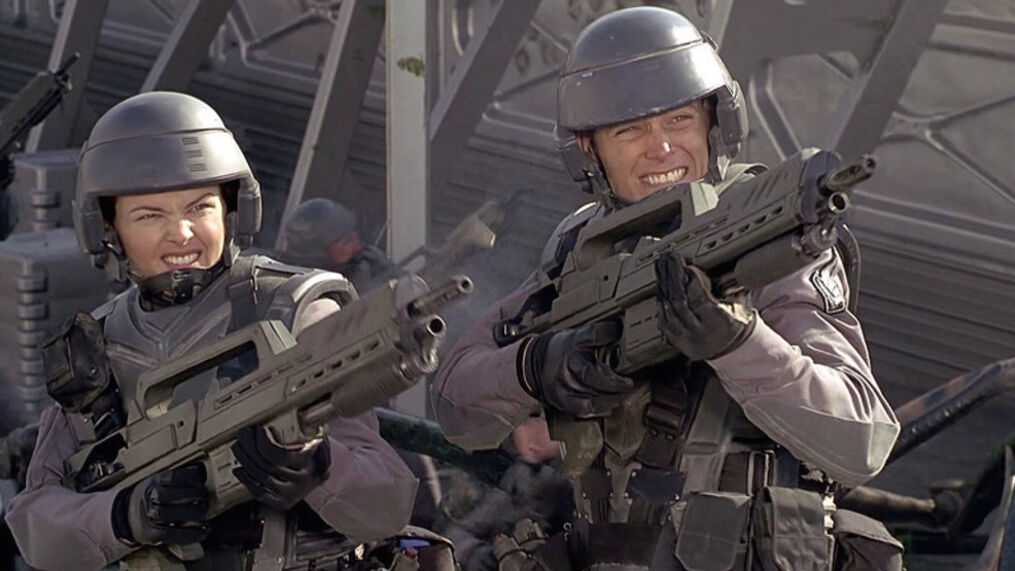 Sony has provided Starship Troopers with a sleek new SteelBook featuring artwork that is truly lovely in person. The front artwork is an animated depiction of a hill of skulls in trooper headgear, and the rear features more of the same with an emphasis on the bugs in the picture. The interior sports a solid light blue appearance that is not creative in any particular way. Video of the SteelBook can be found at the top of this review.

Starship Troopers is another science fiction oddity from Paul Verhoeven which can easily be misunderstood by the wrong crowd, but really packs a thematic punch underneath all of the gruff action spectacle. This movie is incredibly clever in how it comments on actions of the past in a way that informs our future, and history has come to reveal how prescient it truly was. Beyond the narrative weight, the film is simply a lot of fun when viewed as a big science fiction spectacle with cutting edge special effects and violence. Sony Pictures has released a truly stunning new Limited Edition 4K UHD Blu-Ray SteelBook in celebration of the film’s 25th anniversary featuring a top-tier A/V presentation, including newly-implemented Dolby Vision, as well as a plethora of special features both new and old. Even if you have the previous 4K UHD Blu-Ray, there are many compelling reasons to pick up this new set. If you only own this one on Blu-Ray or not at all, this package is a no-brainer for anyone looking to add the best version to their collection. Highly Recommended