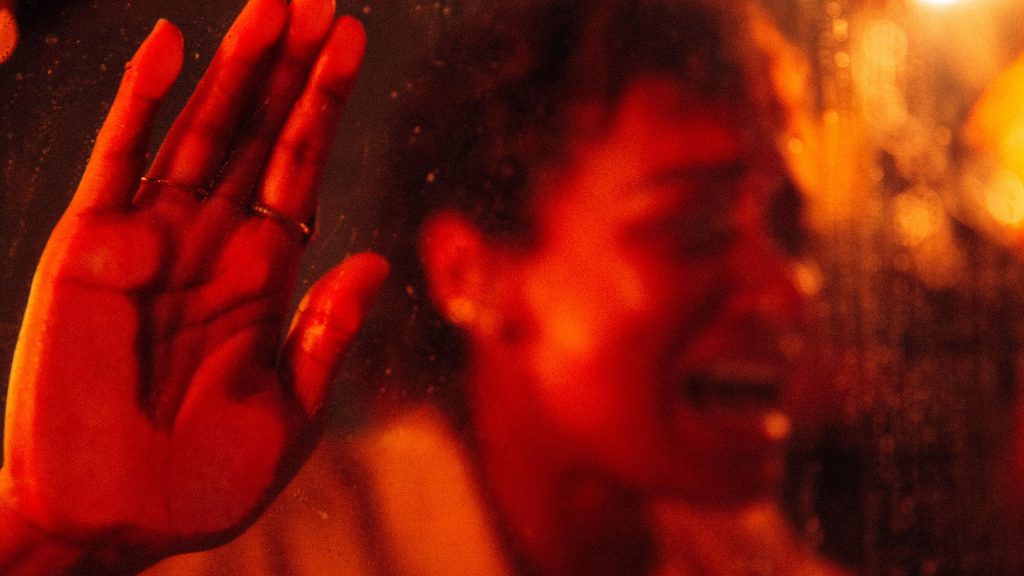 A still from Talk to Me by Danny Philippou and Michael Philippou, an official selection of the Midnight section at the 2023 Sundance Film Festival. Courtesy of Sundance Institute.

We spend a large portion of our lives thinking about death. What happens when we die? Do our spirits move on or does everything simply end? And is there any way for the dead to contact the living? Humans have spent centuries trying to answer these questions. Between the séances of the 19th and 20th centuries and the more recent obsession with Ouija boards, there’s always been this craving to talk with those long since dead. But what happens when you do make contact? What happens if you don’t like what you see? These are the questions at the center of Danny and Michael Philippou’s new film, Talk to Me.

A rumination on the loneliness of grief mixed with a very classic tale of demonic possession, Talk to Me is a scary, emotional ride. It’s just unfortunate that it kind of loses itself somewhere in the second act and never fully recovers.

The Loneliness of Grief

Seeking a distraction on the anniversary of her mother’s death, Mia (Sophie Wilde) gathers with some of her friends to perform a séance. Instead of using a Oujia board, this séance uses a mysterious embalmed hand to reach out to the dead. As is often the case with séances, there are rules. You can’t stay in contact with a spirit for longer than 90 seconds or you won’t be able to get rid of them. But when one of Mia’s friends does just that, all hell breaks loose – literally. Now that the boundaries between the living and the dead have shattered, it’s up to Mia to undo the damage and save her friends before it’s too late. Complicating matters, however, are her sporadic visions of her dead mother and a mystery that reaches all the way back to the night her mother died.

Talk to Me feels like two different movies crammed into one. On the one hand, there’s a fairly typical demonic possession film. A group of teenagers inadvertently opens a metaphysical door, allowing evil spirits into our world, and they have to put a stop to it before the spirits cause irreversible harm. On the other hand, there’s a very intimate exploration of the ways grief can haunt a person more than even the most persistent spirit. Either storyline could’ve easily carried an entire film, especially with how creatively directors Danny and Michael Philippou and co-screenwriter Bill Hinzman approach the material. As is, Talk to Me feels like it never really comes together. It takes ages for things to really get going, and even once they do, it never feels like you’ve got a good grip on what, exactly, the film’s trying to say.

A Muddy Mixture of Emotional Beats and Gory Chills

The problem lies in the way the movie tries to combine these storylines. Each plot thread distracts from the other. Mia’s ongoing grief over her mother’s death takes center stage here. It’s clearly the story the film wants to tell, and it’s easily where the film’s at its most interesting. The issue is that the movie never really says anything about grief, outside of the vague notion of grief being the ultimate ghost. Almost all of Mia’s interactions with her mother are plot-driven, revolving around ways Mia can end her friend’s possession. So, Mia never really gets a real chance at closure with her mother as those scenes just don’t focus on Mia’s emotions. That feels like such a wasted opportunity here as these kinds of horror films offer the perfect vehicles to explore this kind of grief.

As for the haunting, the logistics of the possession never quite make sense, nor is it ever made clear what, exactly, Mia needs to do to end the possession. Without that sense of clarity, it’s difficult to get invested in that storyline because you have no real sense of what the parameters are or even the stakes. Everything feels too vaguely defined, muddying the whole procedure. With how muddy these scenes are, it feels like they’re just distractions from the other, more interesting storyline. Instead of a coherent narrative, one which feels like it progresses along some defined track, you’re just left with a series of gory moments, one after the other. While those moments provide some excellent scares, they just don’t quite make for an interesting story.

On the positive side, screenwriters Danny Philippou and Bill Hinzman do an excellent job ensuring every character feels like a real person. Sophie Wilde’s Mia is the obvious standout here. She carries the entire film on her shoulders, and she does an admirable job. The way she travels through Mia’s emotions is simply extraordinary. She deftly invites audiences into Mia’s mind, forcing us to join her exactly where she is. As the movie grows darker, Wilde brings a lot of grounded honesty to the proceedings, keeping the audience fully connected with Mia even as she grows less connected with reality. You always feel like Mia is a real person going through a truly horrific experience, and Wilde’s performance is incredible to watch. The same is true for the other characters too, it’s just that Mia really takes center stage.

I’d be remiss for not mentioning how excellent the VFX are in the film. Between the gore and the truly impressive makeup on the spirits, Talk to Me is a treat for the eyes. Sure, it’ll absolutely disgust you at times, but even as you’re disgusted, you’ll admire how well-crafted everything is. A note of caution: this isn’t a film for the weak-stomached. I had to look away from the screen a few times throughout the movie because the gore just got to be a bit too much for me. It’s certainly not the goriest movie ever made or anything, it’s just the way the Philippou use that gore that really sticks with you. If you’re a lover of these kinds of movies, though, Talk to Me is sure to please.

At the end of the day, Talk to Me didn’t quite work completely despite seeing what Danny and Michael Philippou and Bill Hinzman were trying to do. They come relatively close to making everything come together, they just don’t think they quite got there. That being said, there’s enough about the movie that’s enjoyable that it’s worth a watch if this is your kind of thing. If nothing else, Sophie Wilde’s outstanding performance and the film’s genuinely impressive VFX are worth the price of entry alone. Some people are absolutely gonna adore this movie, but I can’t help wishing it could’ve found some way of better tying together its plot threads into something that came together more satisfyingly.

Talk to Me had its World Premiere in the Midnight section of the 2023 Sundance Film Festival.

Danny and Michael Philippou's "Talk to Me" offers a rumination on the loneliness of grief mixed with a surprisingly gory tale of demonic possession. The combination doesn't entirely work, but the incredible VFX and Sophie Wilde's performance makes the film well worth a watch - if you've got a strong enough stomach.