‘The Beatles: Get Back’ Blu-Ray Review – A Staggering Look At An Unparalleled Moment In Music Directed by Peter Jackson, The Beatles: Get Back is a three-part documentary series that takes audiences back in time to the band’s intimate recording sessions. The documentary showcases the warmth, camaraderie and creative genius that defined the legacy of the iconic foursome, and is compiled from 60 hours of unseen footage shot in January 1969 (under the supervision of Michael Lindsay-Hogg and his director of photography Tony Richmond) and more than 150 hours of unheard audio, all of which has been brilliantly restored. Also featured – for the first time in its entirety – is The Beatles’ last live performance as a group: the unforgettable rooftop concert on London’s Savile Row, as well as other songs and classic compositions featured on the band’s final two albums, Abbey Road and Let It Be.

For in-depth thoughts on The Beatles: Get Back, please see my colleague Cassie Brown’s review from its original streaming premiere here. The Beatles: Get Back comes to Blu-Ray from Disney Home Entertainment with a very pleasing high definition master that represents the film exactly as intended. Director Peter Jackson combed through countless hours of archival footage to shape this epic, nearly all of which has never been seen by the general public. A complaint I saw echoed by many A/V fanatics when this first premiered on Disney+ was the lack of natural film grain which would give extra texture to what we were seeing. Those familiar with Jackson’s work in the past decade will not find this surprising, as he chooses to make a smooth seamless experience which looks incredibly clean but lacking the texture of natural film. This is how the material will always look unless another project is made of it, and this Blu-Ray maintains the look that Jackson chose when he created this film.

“Unnatural” or not, this material looks incredibly striking in high definition. While this is available to stream in 4K on Disney+, I would honestly say the Blu-Ray release offers the stronger picture quality overall. The lack of compression issues on this physical release greatly improves the experience. You really get a sense of depth when the lads are positioned at different points in the studio and rehearsal space. The colors featured in the footage have an impressive sense of vibrancy to them, especially in certain lighting or with some elements of the production design. The skin tones look natural across all of the people on screen, and you get a strong amount of detail in close up, especially. The archival footage has no instances of damage or anomalies such as banding or compression artifacts. While we still dream of a 4K UHD release one day, we are simply grateful to be able to own this on physical media in high definition at all. 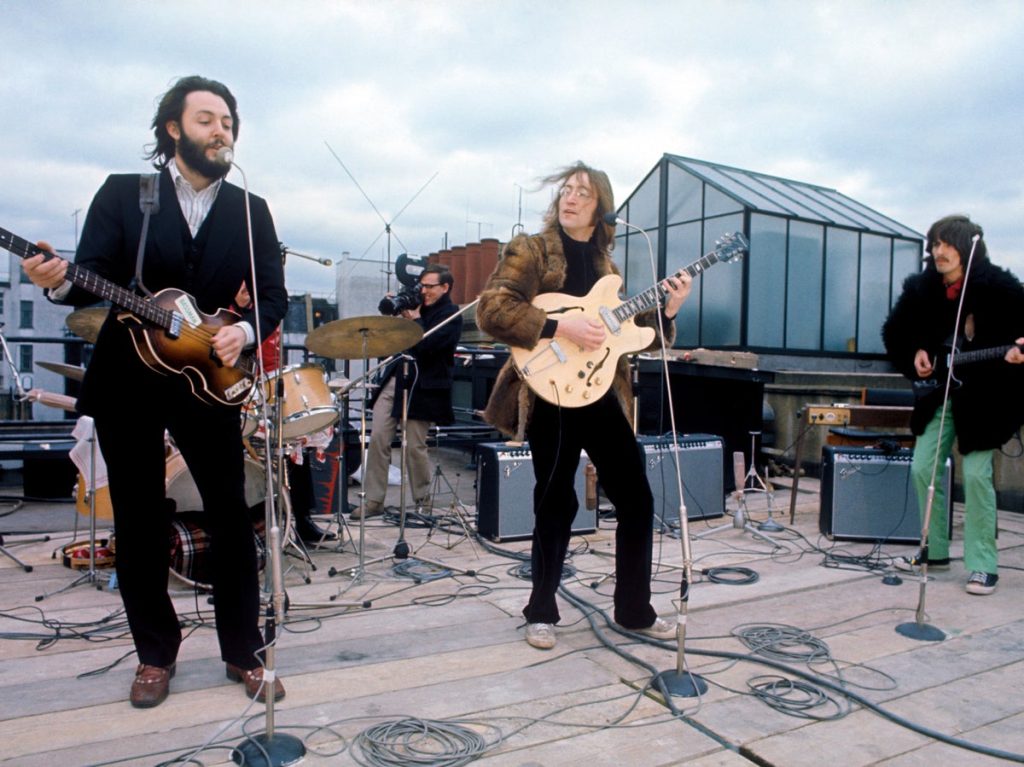 The 4K UHD Blu-Ray disc utilizes a Dolby Atmos track which gives the basic soundscape extra vitality and a more deeply immersive quality that makes you feel like a fly-on-the-wall. There is an emphasis on the front channels for a good portion of the chatter, but activity extends to the surrounds, rears and overhead speakers when it comes to the music and certain environmental sounds to make these spaces feel more robust and all-encompassing. The sounds up above are not constant, but they provide an umbrella of sound to keep the listening experience quite engaging. You will not find these channels doing too much when there is no music being played. These classic songs wash over you in a really satisfying, enveloping way throughout. Dialogue is crisp and clear without ever getting lost amongst the music or environmental happenings. The low end effects from the subwoofer are mostly engaged to provide some extra texture to the musical moments. Atmospheric sound effects are rendered appropriately within the mix so that directionality is never an issue. While this film may not benefit from an Atmos track in the same way as big blockbusters, the expanded audio track allows it to feel more powerful and precise than ever thought possible. This is the next best thing to being in the room.

There are also uncompressed LPCM 7.1 and LPCM 2.0 audio tracks included, along with an English Descriptive Audio track in Dolby Digital 2.0. There are optional English SDH, French, Spanish, German and Japanese subtitles provided.

There are no special features included on the discs. The Blu-Ray does come in a special Collector’s Edition packaging with some photo cards.

The Beatles: Get Back is simply one of the most exciting historical documents to be unleashed upon the world in many years. The draw is obvious if you are a fan of The Beatles, as you get to see the steady creation of some of the best music ever created. Yet, you do not have to be a superfan to appreciate what is being accomplished in this documentary. There is something very special about seeing the creative process in action, slowly chipping away at the mental impediments to get to a catharsis known as a complete song. There is more to this than just the music, though; the interplay between four deeply connected friends is fascinating to watch as you get to witness little throwaway jokes and moments that will stick with you forever. Everything about this documentary is magical. Disney Home Entertainment has released a Blu-Ray set featuring a terrific A/V presentation in a beautiful collector’s package. Even the most casual music fan will probably gain a lot from this. Essential

The Beatles: Get Back will be available to purchase on Blu-Ray and DVD on July 12, 2022.

Disclaimer: Disney Home Entertainment has supplied a copy of this set free of charge for review purposes. All opinions in this review are the honest reactions of the author.