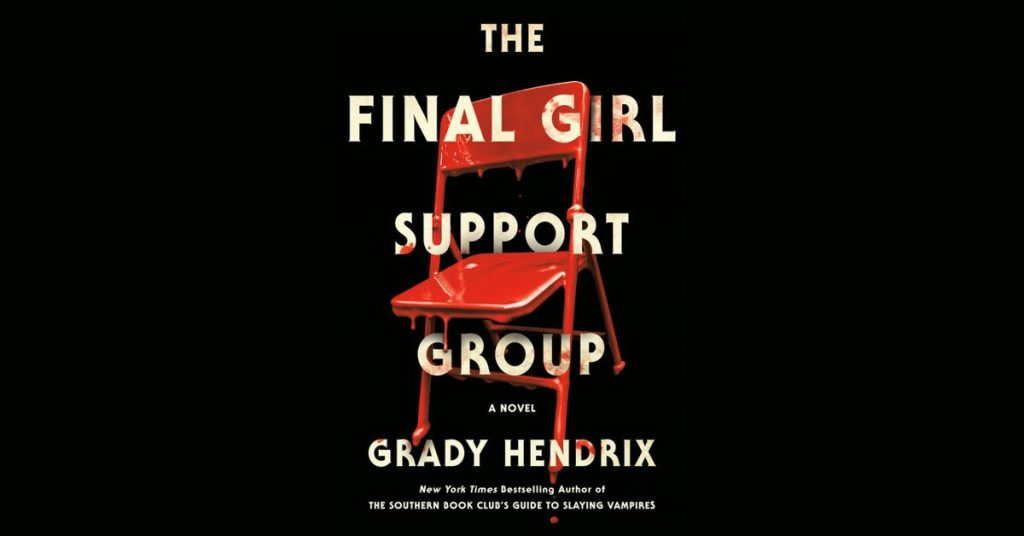 Lynnette Tarkington is a real-life final girl who survived a massacre twenty-two years ago, and it has defined every day of her life since. And she’s not alone. For decades she’s been meeting with five other actual final girls and their therapist in a support group for those who survived the unthinkable, putting their lives back together, piece by piece. That is until one of the women misses a meeting and Lynnette’s worst fears are realized—someone knows about the group and is determined to take their lives apart again, piece by piece.

If you’ve ever seen a slasher film, then you’re familiar with the Final Girl. She’s the girl who makes it through the end of the movie, vanquishing the Killer and surviving the bloodbath. But what happens to a Final Girl after the credits roll and the story’s over? How does she cope with all of that trauma and survivor’s guilt? Is she ever able to move on and escape the shadow of the Monster that hunted her?

Grady Hendrix’s The Final Girl Support Group explores all of these questions, acting as both a love letter to slasher films and a deconstruction of the genre and many of its tropes. It’s a fast-paced, thrilling read that you won’t want to put down. Hendrix delivers a novel that’s every bit as action-packed and horrific as the best horror films. But he also deftly explores the trauma of multiple Final Girls – all of whom are inspired by some of the most popular horror franchises. If you’re a fan of horror movies, The Final Girl Support Group is a must-read.

The Final Girl Support Group is a massive love letter to the slashers of the ’70s and ’80s. Twenty-two years ago, Lynette Tarkington became a Final Girl. Ever since, she’s been attending monthly support group meetings with five other Final Girls – Adrienne, Julia, Dani, Heather, and Marilyn. All six women are struggling with life after near-death, each of them in different phases of recovery. And many of them are ready to move on from the group. However, when one of the girls turns up brutally murdered, Lynette suspects someone is targeting the group. A suspicion that’s soon proven true after a series of further attacks. However, the rest of the girls don’t believe her, assuming she’s grasping at straws to keep the group together. But the threat is very real, and it’s up to Lynette to uncover the Monster before they eradicate all Final Girls.

The Final Girl Support Group is Hendrix’s attempt at writing his own slasher movie, from the extreme acts of violence, to the puddles of blood, to all the twists and turns. The plot is sometimes silly and often requires a bunch of logical leaps, but you rarely think about that. The narrative is such a fast-paced whirlwind, whipping from plot point to plot point with wild abandon, that you mainly focus on how fun it is. It’s a gripping read, never stopping once it gets started. In fact, you won’t want to stop reading until the book’s end. At times, it feels a little long. But it’s well-paced and easily holds your attention. The mystery is executed masterfully, and the climax is one of the most satisfying I’ve read in a long time. Hendrix certainly asks for a lot of trust, but he rewards you for it by the end.

Each of the Final Girls in the novel are based on ones from classic slasher franchises. Adrienne represents Friday the 13th, Marilyn represents The Texas Chainsaw Massacre, Dani represents Halloween, Lynette represents Silent Night, Deadly Night, Heather represents A Nightmare on Elm Street, and Julia represents Scream. Hendrix is pretty blatant about this, with each of his characters having near-identical backstories to those in these respective slashers. But honestly, it works really well. It’s kind of fun seeing how these characters we’re all familiar with might be coping years after the credits rolled. The latest Halloween film touched on this idea of revisiting a Final Girl decades later and exploring her trauma, and Hendrix takes it to the next level.

Lynette is the narrator of the novel. Of all the Final Girls, she might be struggling the most visibly. She’s isolated herself from everyone she knows, essentially living in a fortified cage. Her paranoia and fear of further violence weigh down on her to the point that she’s barely able to live at all. Honestly, I initially found it difficult to relate to her. There were moments where she’d do something so unbelievable that I just wanted to tell her to take a breath and actually think about what’s going on. But as the book goes on and more of her characterization is explored, it’s easy to root for Lynette. She’s a bit of an unreliable narrator but in the best way. For large chunks of the book, it’s unclear whether or not Lynette’s experiences are still rooted in reality. And I love that kind of ambiguity.

Much of the novel follows her journey. We track her as she works out what’s going on and who’s after the Final Girls. We see her make many mistakes, always rebounding from them and learning from them. And, best of all, we see her grow. We see the early bits of healing finally take root. We get to see her come out of her shell. And it’s glorious, and so well executed. The narrative’s antagonist also ends up feeling well-developed. Without going into spoilers, one of the novel’s highlights is the way the antagonist’s development mirrors Lynette’s. Unfortunately, the rest of the Final Girls aren’t given anywhere near as much development, though. But they’re still a lot of fun, each feeling three-dimensional even if they’re not given a whole lot of attention.

A Deconstruction and Reexamination of Horror Tropes

The Final Girl Support Group isn’t content with simply replicating classic slasher films, though. It also frequently deconstructs and reexamines the tropes of the genre. While slasher films often come across as exploitative of their violence, Hendrix’s novel feels more like a condemnation of it. In the films, the POV often shifts between the Final Girl and the Killer, occasionally robbing the audience of truly feeling the weight of this violence. But here, the POV is squarely on these women who have survived such atrocities. We see how their lives have been irrevocably changed by their encounters with their respective Killers. We understand exactly how damaging these ordeals are. And, sure, all of the Final Girls in the book have to survive yet another traumatic series of murders, but so much of the book focuses on their psyche. It’s a story about women surviving rather than one about men destroying.

Throughout the novel, there’s this recurring idea that Final Girls and their Killers are two sides of the same coin, with only the thinnest of lines separating them. The Killers senselessly murder people while the Final Girls have to kill the Killers to stop these murders. But that single act of killing a Killer weighs heavily on each of the final girls. And Hendrix plays with this idea throughout the novel. This small twist on the idea of a “Final Girl” breathes so much life into the novel, giving these women a sense of agency they don’t always have in slasher films. And it adds some nuance to everything – a nuance that pays off in dividends by the climax. The Final Girl Support Group adheres to many of the classic slasher tropes, but not without recontextualizing them a bit. And it works extremely well.

Going into The Final Girl Support Group, you might expect more of a campy horror-comedy, in the vein of The Cabin in the Woods. But that’s not what this is. Hendrix takes the genre seriously, even as he reexamines and recontextualizes many of its tropes. The Final Girl Support Group is as much a traditional slasher as it is a commentary on them. The women in this story have gone through terrible tragedies in their past, and have to band together to survive yet another one. And that circular nature of violence is felt throughout the book. If you’re a horror lover and a fan of slasher movies, you’ll adore The Final Girl Support Club. It hits all of the notes you’d want it to while still feeling fresh. But if you’re a bit squeamish, this might not be the book for you. As for me, it’s an absolute must-read.

Disclaimer: A review copy of the novel was provided by Berkley/Penguin Publishing Group. All opinions in this review are the honest reactions of the author.