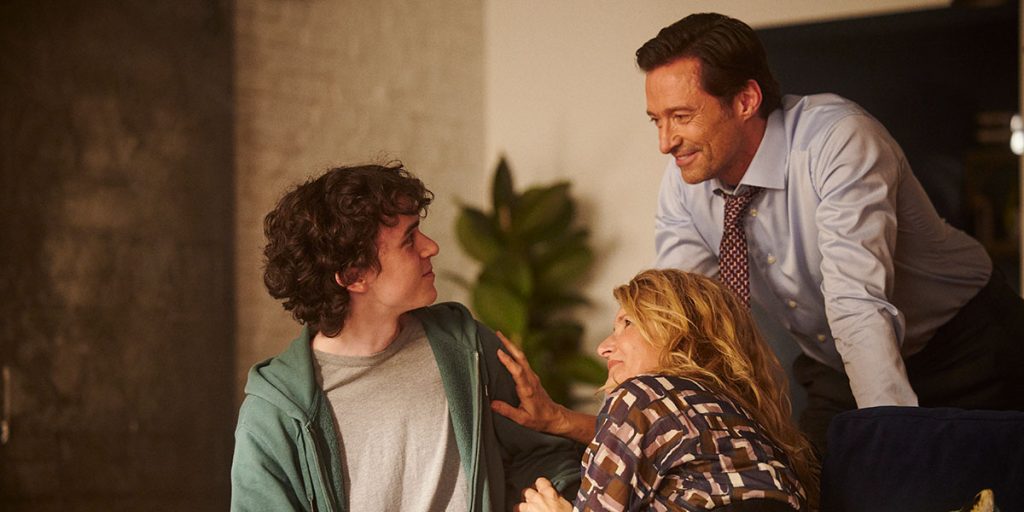 The Son is a difficult film to watch.

Films dealing with suicidal ideation are not, nor should they be, easy. They are important, though. These films can offer a sense of identification for audiences experiencing similar feelings, hopefully encouraging them to seek help or resources. In other cases, they can be sources of representation and de-stigmatization, helping people feel seen in ways they might not have otherwise.

The Son is not difficult because of these reasons.

Directed and co-written by Florian Zeller, The Son follows Peter Miller (Hugh Jackman), a high-powered New York City lawyer, as he tries to help his son Nicholas (Zen McGrath) with his severe depression. After learning about his troubles with his mother, Peter’s ex-wife Kate (Laura Dern), Peter hastily invites Nicholas into his new home with his new wife, Beth (Vanessa Kirby), and their newborn son. As you might imagine, the transition isn’t easy. Nicholas’ presence forces Peter to grapple with his past choices with Beth and Kate, his plans to move to DC, and his opaque relationship with his own father (played by Anthony Hopkins).

This all sounds like the makings of a compelling, heart-wrenching family drama. The Son is decidedly not that. The film goes through extraordinary pains to secure unearned emotional responses that make little narrative or character sense. The greatest frustration comes from the screenplay, adapted from Zeller’s stage play of the same name. I can’t speak to the source material, but given its acclaim, some alchemy was fatally lost in translation. The story is inert, its characters spinning their wheels despite the obvious urgency of Nicholas’ mental health crisis.

Peter is particularly appalling in how little growth or development he experiences throughout the film. He responds to his son’s cries for help (and manipulations) with the same emphatic yet remote engagement, observing and learning nothing throughout the film. Peter’s world is complicated, sure. However, the film doesn’t communicate that well, nor does it satisfyingly show his dueling priorities weighing on him. (Unless you count two shower scenes that feel progressively pointless.) It can be baffling to watch Peter, which is unfortunate because he is our window into this strange, disjointed world where no one seems to know anything about anything.

With little in the way of a meaningful story or character arc, Zeller settles on directorial choices that consistently cross the line into emotional manipulation. Sometimes he’s unsubtle to the point of distraction about this story’s conclusion. Zeller will cut to an active washing machine several times to telegraph Nicholas’ ultimate, devastating decision. He’ll capture a moment of genuine fun between Peter, Beth, and Nicholas in slow motion to convey how easy it is for Nicholas to dissociate. These stylized choices don’t add to the fraught family dynamics the film should be concerned with. (The film succeeds when it explores the Millers’ messy connections, like between Nicholas and Beth.) Their purpose seems to be choreographing how we respond to the film. Even when Zeller succeeds in exacting the desired reaction, it rings hollow.

It would be manageable if The Son were just a profoundly frustrating, narratively inert, and over-directed family drama. The film crosses into egregious territory with its third act. Movies aren’t necessarily required to depict the real world accurately. It’s different when you’re depicting a mental health crisis. Peter and Kate’s assessment of their son’s need for medical intervention is shockingly bad, almost malfeasance. There is not one honest moment in that scene or the one that follows. They exist solely to get to the film’s highly-telegraphed conclusion, and the feeling that you’re being suckered is sickening. Only at the end does the film come close to an earned emotional moment, beautifully acted by Jackman. Of course, the script manages to ruin that too.

It’s a shame because Zeller assembled a usually-unassailable cast to bring The Son to the big screen. I’ve written about Hollywood’s apparent movie star problem, but there is no denying that Hugh Jackman is a bonafide star. He radiates charisma on the screen, even when the script holds him back. Zeller doesn’t give Jackman nearly enough to do, and it’s irritating to see his talents wasted. The few moments where he is allowed to dig into Peter’s pain and regret are remarkable. Vanessa Kirby is the film’s standout, carrying all the seething tension that builds as her extended family falls apart in her face and soft but firm voice. Laura Dern and Anthony Hopkins both have strong moments where they get to add much-needed depth to their characters.

Florian Zeller writes and directs The Son as if he’s holding up a cue card to the audience, telling us how we’re supposed to feel at any given moment. He doesn’t give us the opportunity or the material to build a real connection with Peter and his family. The emotions Zeller does land have little to do with what’s on the page or the screen. Is it possible to be genuinely moved by The Son? Yes, depending on how much you identify with depression or suicide, or other mental health crises. However many tears you shed, it’s worth asking if the film deserved them. For all the emotional manipulation on display, I’d argue not.

The Son had its North American Premiere in the Gala Presentations section of the 2022 Toronto International Film Festival.