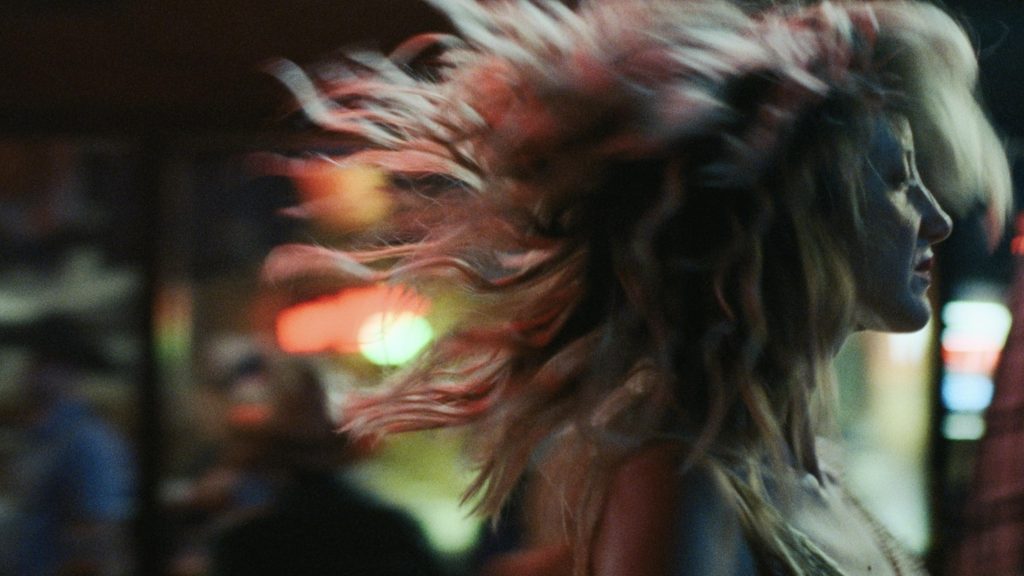 Remember the ending scene from Another Round (2020), where Mads Mikkelsen gleefully dances, drunk out of his mind, at a Danish pier? That feeling of misguided playfulness is gone in Michael Morris’ To Leslie (2022), which premiered on March 12th at SXSW. Another alcoholism epic, Morris’ film focuses on the tortured reality of his mother, off of whom the film is based.

The film’s eponymous protagonist, Leslie (Andrea Riseborough), became a household name in her small Texas town when she won the lottery. That fame quickly turned to notoriety when she spent much of that cash to fuel her alcohol problem. The film takes place in the years that follow, after she left her teenage son and started living on the streets. We begin with an emotionally fraught reunion with her now-adult son (Owen Teague), which ends when he discovers she has been drinking again. Over the course of her journey that follows, a local motel owner named Sweeney (Marc Maron) takes her in and nurses her back to health.

It’s based on the true story of the writer’s mother, and his camera tracks her with a delicate intimacy and intense subjectivity. That said, it’s hard to sympathize with her. Riseborough’s performance is incredibly strong, but for the entire first two thirds of the movie, her character does nothing but manipulate and take from the people who try to help her. Relatives Dutch (Stephen Root) and Nancy (Allison Janney) are positioned as villains after they shut her out, but it’s perhaps too easy to see it from their side. Their villainy is only firmly established later in the film, when they continue to publicly trash Leslie despite her sobriety. In this characterization, Root and Janney are turned into caricatures of Texan hillbillies; Janney sports a bizarre (presumably) fake tan that left her eyes untouched and pale. After all the terrible things we’ve seen Leslie do, it’s hard to find her likable even when she does redeem herself.

Its narrative is fundamentally a bit all over the place, probably to create the subjectivity that defines it. However, the product has a few major pacing issues. For a film that details the passage of miserable time, that time passes in bizarre ways. Scenes meant to represent a long period of time are cut short, undermining the narrative punch they would otherwise bear. At the end, one final push towards self-betterment is completely omitted by the film, lazily replaced instead with a “ten months later” card. The period after she leaves her son’s apartment and before she gets sober is painfully drawn out, not allowing for much time to breathe between tense and awkward moments of pure suffering. It takes far too long for Leslie to become even marginally forgivable.

The romantic relationship at the core of the film, between Leslie and her savior Sweeney, feels rooted in problematic power dynamics. Sweeney spends most of act two “fixing” Leslie, seeing her at her worst and most vulnerable. The reverse never happens, and Sweeney is never revealed to be anything other than saintlike. Any relationship between them is defined by his constant giving nature contrasted by her taking one. It’s a recycled version of the damsel in distress trope and feels a bit uncomfortable, and it taints the rest of the movie.

All of that said, there’s something undeniably charming about the film’s third act, in which Leslie finally starts to experience some genuine happiness. For much of the film, she engages in a variety of cringeworthy bar encounters that would have been at least a little more excusable in her youth. Now a middle-aged woman, these moments of flirtation and dance are almost hard to watch. When she finally gets sober, she becomes noticeably more comfortable in her age, and some of that awkwardness goes away especially in one delightful carnival sequence.

While Riseborough stands out in her dominating performance, the supporting cast, especially Andre Royo as another motel employee named Royal, occasionally shines through. His character brings a comedic no-nonsense attitude that serves as an important counterpoint to Leslie’s early manipulations of his friend Sweeney. Owen Teague also does well as Leslie’s extremely kind son. Though Allison Janney shined in a similar role in I, Tonya (2017), she was disappointing here.

Overall, To Leslie is a perfectly average movie that unfortunately fails to stand out as particularly memorable, especially in the realm of other more impactful movies about either alcoholism or the life of hillbilly.

To Leslie was viewed in the Narrative Spotlight section of SXSW 2022.

Emmy is a big fan of all things TV and movies. Among her current favorites are The Matrix, Midsommar, Titane, and Fleabag.  Catch her on Letterboxd @ewenstrup !