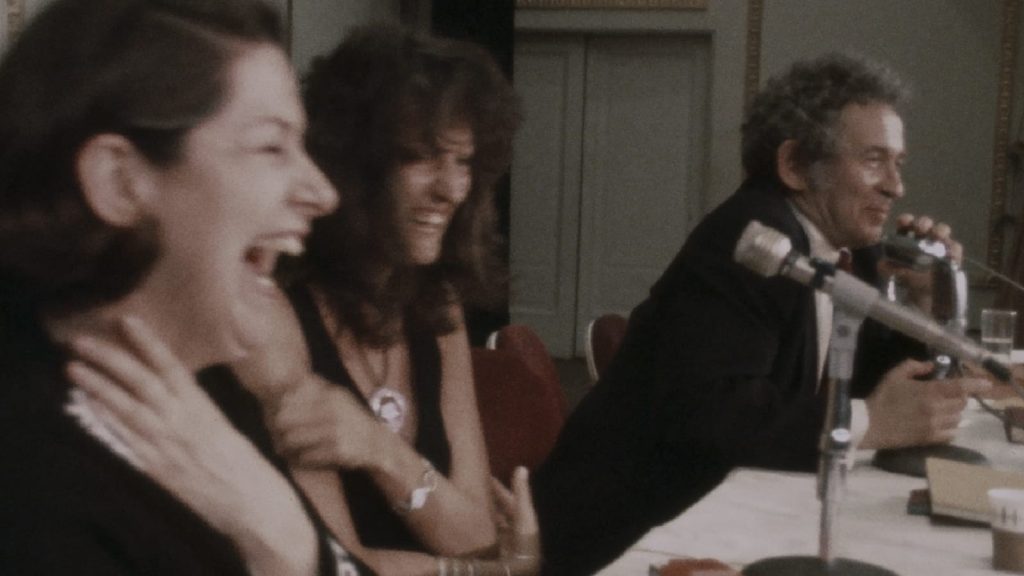 We are living in an era where women’s issues are top of mind due to the uncertainty in the political climate. Women are fighting for their right to be treated as equals, as well as having domain over their own bodies. As with any tension in society, that frustration has had a direct impact on the art that has been created in recent years. Just look at FX’s Mrs. America starring Cate Blanchett from earlier this year. This was a series shining a spotlight on the fight to ratify the Equal Rights Amendment in the 1970s, but it also served to highlight just how slowly things have changed in the last fifty years. The Criterion Collection has chosen to release an important documentary that serves as the perfect companion piece to this series. Chris Hegedus and D.A. Pennebaker’s Town Bloody Hall has long been relegated to PBS stations or academic institutions, but it deserves to be available to the largest audience possible due to its unfortunate relevance to modern times.

In March of 1971, bad boy of the literary world Norman Mailer published a controversial essay entitled “The Prisoner of Sex” in response to a critical thrashing he received in Kate Millett’s Sexual Politics. The essay caused quite the stir amongst the intellectual elite, so an enterprising organization decided to organize the “Dialogue on Women’s Liberation” on April 30, 1971, at Manhattan’s Town Hall where audiences could gather to witness Mailer engaging in a spirited conversation with four prominent members of the feminist movement, each with their own agenda. Mailer invited Pennebaker to unofficially film the heated three-hour event, which was edited down to an engrossing hour-and-a-half documentation of a night that eventually grew to mythic proportions. Many notable figures within the feminist movement simply refused to appear with Mailer in this forum, but those who did agree represent a wide array of viewpoints that you will either cheer or jeer depending on your personally held beliefs. 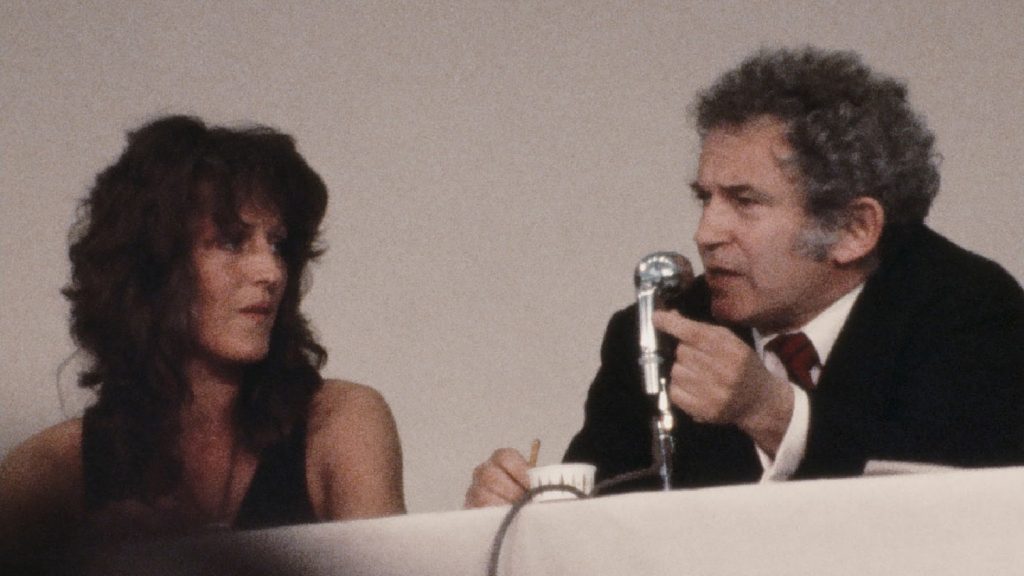 Norman Mailer holds court over the evening like a pugilistic emperor in his position as the panel moderator. Each woman is given ten minutes to speak on whatever they would like before entering into a Q&A with the audience in the second half of the evening. The women take differing approaches to their topics; Jacqueline Caballos, the president of the New York Chapter of the National Organization for Women, addresses issues in a straightforward manner with a focus on women’s liberation. She espouses ideas such as the belief that stay at home mothers should be compensated for their contributions. Village Voice writer Jill Johnston chooses to read a twisty, witty thesis that argues that all women are lesbians, and they must accept themselves as such to enact real political change. The audience is divided into camps that find her either hilarious or unbearably taxing. The former are correct, as her outrageous free association is one of the highlights of the evening. This was an evening barely contained by a semblance of structure, so it comes as little surprise when Johnston leaves the stage completely after running over her time and being asked to stop. The audience reaction to this is impassioned, to say the least.

The star of the evening is Australian feminist writer Germaine Greer, author of The Female Eunuch. In addition to being the most eloquent in her address, she also wields the most confidence against the incorrigible Mailer. When you have the final speaker, literary critic Diana Trilling, kowtowing to her friend Mailer when not vocalizing her muddled treatise, you need someone like Greer to keep things balanced. Or, as balanced as they can be when you have a lighting rod like Mailer on stage. For someone who keeps mentioning that he wants to keep the attention off of himself, he does an expert job of hijacking the conversation at every point. This is a mixture of his bombastic nature and the audience directing questions specifically to him instead of the other panel members. With notable figures in the audience such as Susan Sontag and Betty Friedan (portrayed by Tracey Ullman in Mrs. America), the Q&A portion of the evening often yields some of the highlights of the discussion. The event is bubbling with strong opinions, and it is truly fascinating to see this caught on film in a variety of different instances. 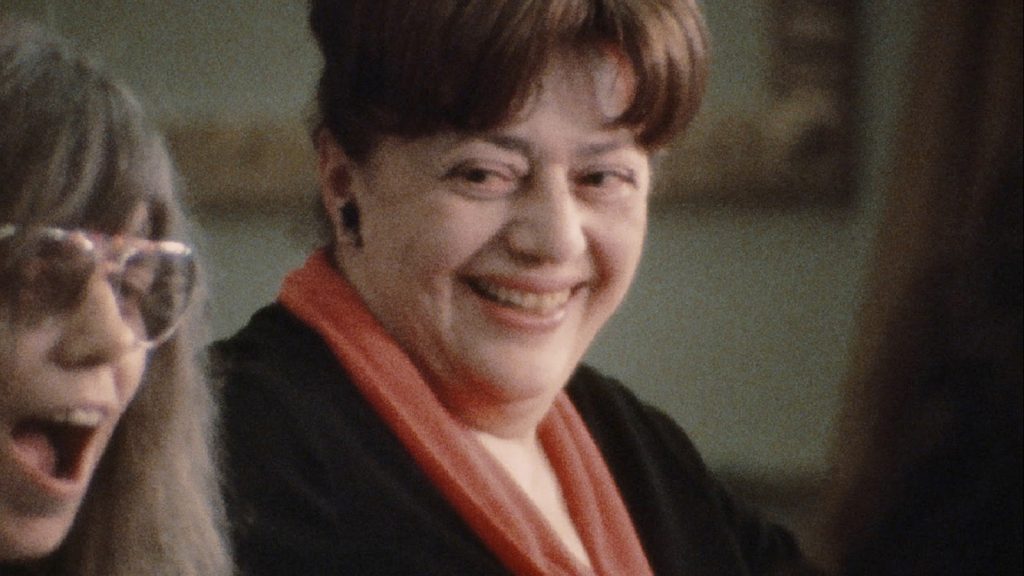 As a documentary, Town Bloody Hall, a title that comes from a frustrated exhalation by Greer, gives the audience the you-are-there experience. It does not simply serve to capture the conversations on stage. It allows you access to the palpable mood the event conjured on this particular evening. Before the event even starts, the filmmakers capture hecklers outside of the venue who are upset over class inequities. The film is unafraid to veer away from the speakers in favor of capturing the picture perfect reactions from the audience that complements the words so wonderfully. Similarly, while the panelists are often trading barbs on stage, tensions appear just as high within the audience as outbursts and walkouts read as commonplace. Town Bloody Hall does a commendable job of letting the content speak for itself without imposing judgment. If you are interested in the history of feminism, that is essential viewing. You might not be surprised to learn that we are still having many of the conversations featured in the film to this day.

The Criterion Blu-Ray of Town Bloody Hall is presented in its original 1.33:1 and is sourced from a newly restored 4K digital transfer from the 16mm A/B reversal. This is a very nice looking transfer that eliminates nearly all of the print damage and maintains good film grain support throughout. When you consider the enterprising way in which the film was shot, it is impressive how great the film looks. There does not appear to be any issues with compression artifacts or any other such digital anomalies. This beautiful restoration gives the film the proper presentation that it deserves. 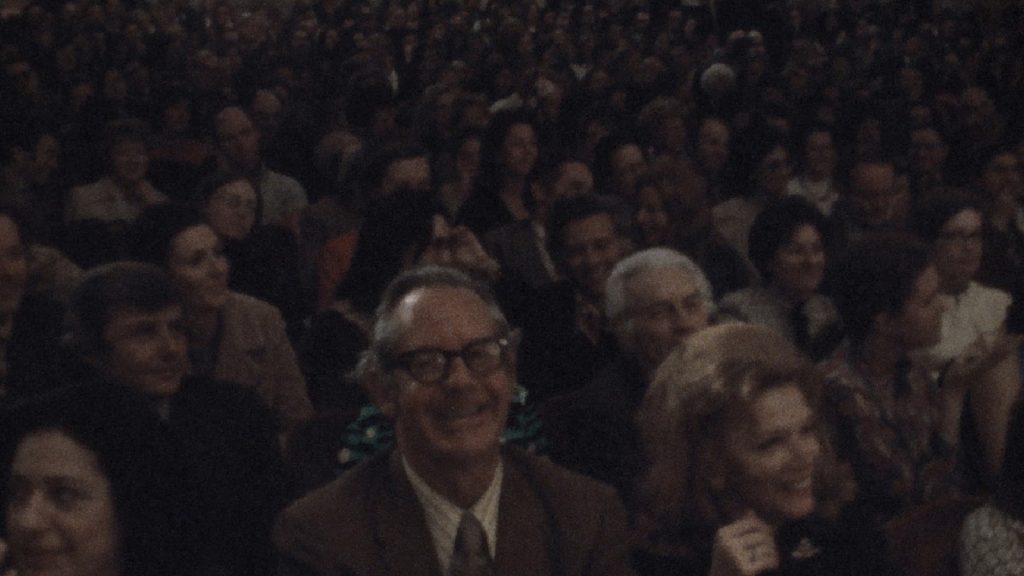 The audio soundtrack is presented remastered from the original 16mm magnetic tracks in lossless PCM 1.0 monaural. The dialogue is as clear and consistent as it can be, but there are minor sound issues due to the source material and how the documentary was filmed on the fly. The most important thing is that the track remains faithful to the intention of the creative team. English subtitles are provided and come in handy due to raucous nature of the event. The film sounds as good as it has ever sounded on this Blu-Ray.

The Criterion Blu-Ray of Town Bloody Hall includes a multi-page fold out booklet that doubles as a poster on one side, featuring the essay “On The High Sea” by Melissa Anderson, film critic and editor for 4Columns. This gives great context to the women’s movement at the time, and highlights some of the future accomplishments of those featured in the film. The on-disc special features are as follows: 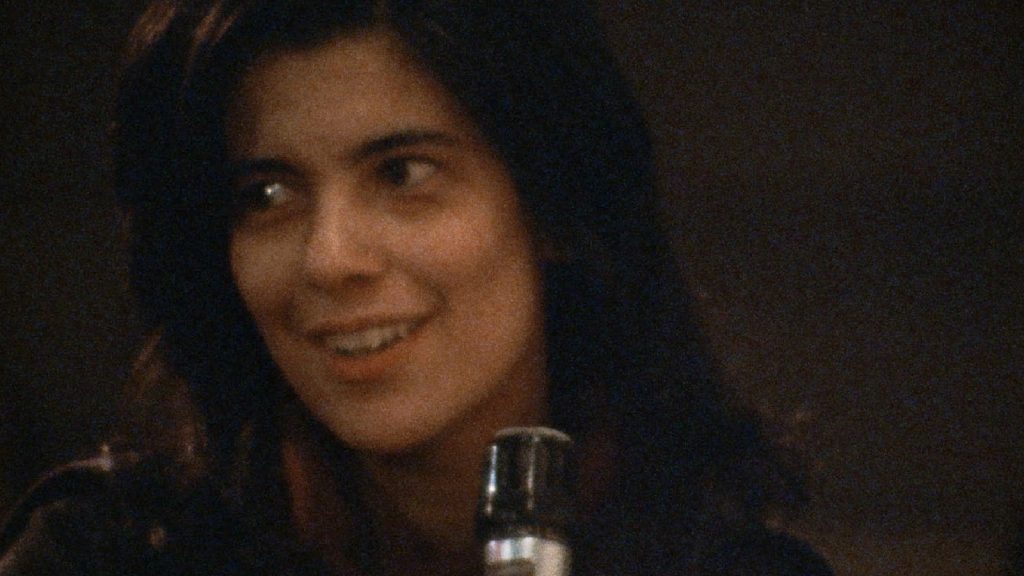 Town Bloody Hall is an utterly fascinating look at what happens when you get erudite individuals with differing viewpoints together in a room to discuss hot button issues. The film is extremely clever, insightful and infuriating all at once. The Criterion Collection has done the world of documentary cinema a great service by rescuing this for a modern audience. They have provided a Blu-Ray disc with faithful, pleasing A/V presentation and some captivating special features. This is a film that is going to stick with me for a while. If this sounds in any way in your wheelhouse, you owe it to yourself to check it out. Highly Recommended

The Criterion Collection edition of Town Bloody Hall will be available to purchase on August 18, 2020 on Blu-Ray and DVD.