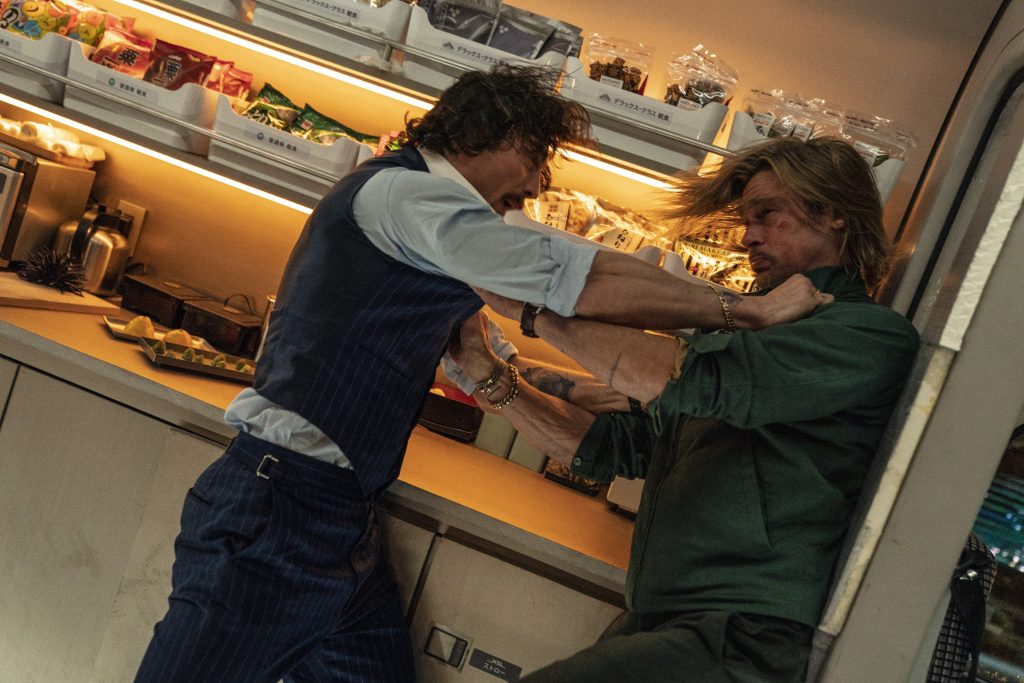 Bullet Train confirms what everyone who’s ever woken up early in the morning to get to work knows: commuting sucks.

As much as commuting sucks, seeing one of the world’s biggest movie stars experience its worst-case scenarios is pure joy. The movie star in question is Brad Pitt, playing a reformed assassin codenamed Ladybug assigned a new job aboard a commuter train in Japan. Ladybug has one job: hop on the train, retrieve a metal suitcase, and hop off. Sounds pretty simple, right? It would be if assassins after the same suitcase didn’t fill the train. Bullet Train is a good old-fashioned Battle Royale where several natural-born killers punch and shoot their way through a farcical Japanese funhouse on high-speed wheels.

It sounds ridiculous, messy, debased, and a lot of fun. Thankfully, Bullet Train delivers on all fronts. Director David Leitch (Atomic Blonde, Deadpool 2) captures every gruesome and absurd moment with a wicked sense of glee. You can practically hear the snicker behind the camera as British brother assassins Lemon (Brian Tyree Henry) and Tangerine (Aaron Taylor-Johnson) squabble or when Ladybug frustratedly kicks ass despite his newfound pacifism. Leitch fully uses the train set, staging some truly outrageous and delightful fights on every imaginable surface.

Nothing is off limits, from the train’s narrow nose to the snack carts. The action set pieces are heady and grounded, each punch, kick, and stab landing with a satisfying thud. (It’s enjoyable enough to excuse the somewhat wonky-looking CGI.) However, the film largely resists taking itself too seriously. How can it be when a fluffy anime character accidentally bumps into people actively trying to kill each other? Even when it aims for more serious material, Bullet Train doesn’t lose its mischievous nature, thanks to its surprisingly strong character work.

Bullet Train’s wonderfully rich characters, performed by a top-notch cast, make the trip worth it. Despite the film’s marketing positioning as a Brad Pitt vehicle (pun slightly intended), it’s truly an ensemble effort. Joey King, Andrew Koji, Michael Shannon, Zazie Beetz, and Sandra Bullock are all great, embracing the film’s unhinged energy. (There are also some surprise cameos that work well.) For Pitt, Bullet Train gives him plenty of opportunities to play up his post-Oscar weirdo era, and he excels. He doesn’t have to try to be captivating on screen, but his exasperation at the increasingly insane circumstances makes him even more fun to watch than usual.

And yet, Brian Tyree Henry and Aaron Taylor-Johnson steal the film from him. The two form one of the year’s most dynamic film pairings, sharing comedic chemistry that is almost too good to be true. They are effortlessly funny and are the film’s emotional core, as two brothers who only have each other. Henry and Taylor-Johnson quickly draw you into their antagonistic but genuinely caring relationship. By their second scene together, you’re itching for a spin-off or for them to team up in another movie very soon. They deserve credit for many of Bullet Train’s best moments.

The only thing stopping Bullet Train from going all in on the rampant silliness is its overly complicated plot. The film’s pace sputters from a complex web of relationships and grievances that often feel besides the point. Bullet Train’s first half is most guilty of this. Instead of focusing on what’s happening on the train, Leitch frequently cuts to flashbacks that add somewhat helpful context. To his credit, the scenes can be entertaining in their own right. (Lemon and Tangerine breaking the fourth wall as they recount their kills is brilliant.) Still, it feels like you need a notepad to keep track of every character’s motivation. Having them fight over the suitcase would’ve been less complicated and more fun. It also probably could’ve shaved 30 minutes off the runtime, making for a tighter experience.

Bullet Train’s narrative incoherence and distracted pace are easy to forgive. Even when it’s close to hopping off the rails, the film keeps you smiling and laughing with the shenanigans. It doesn’t pretend to be more than it is – an adrenaline-laced action romp with a silly sensibility. That’s easy to mock, especially since Bullet Train isn’t reinventing the wheel. Bullet Train is on the joke, though, and every self-aware wink that punctuates a bloody splatter makes the film more enjoyable. If only our daily commutes were this much fun. 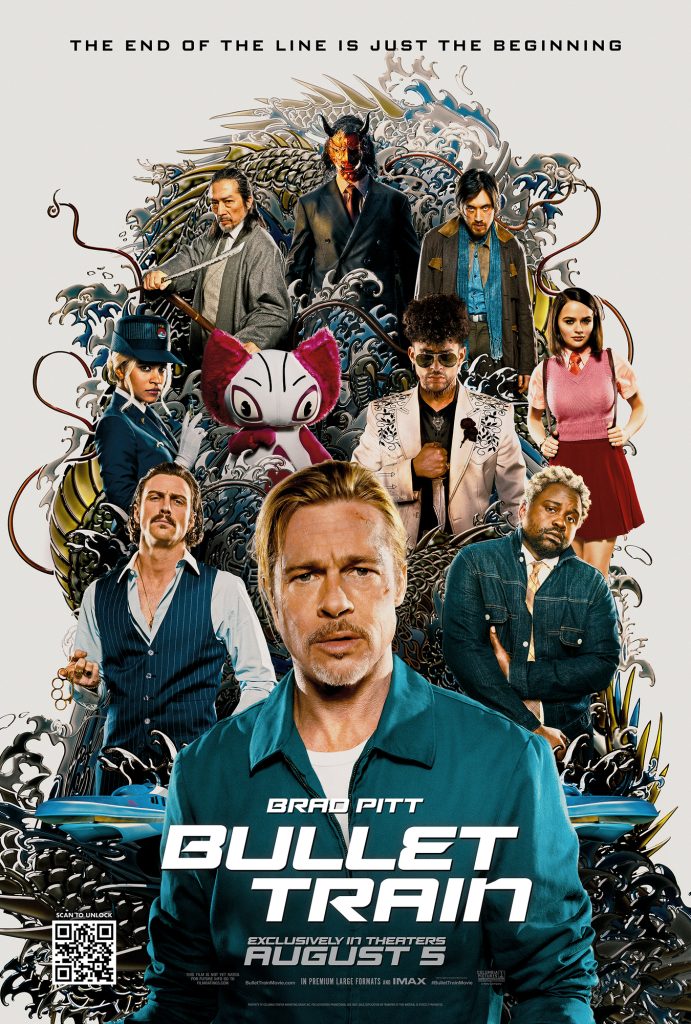 Bullet Train's wonderfully rich characters, performed by a top-notch cast, make the trip worth it.