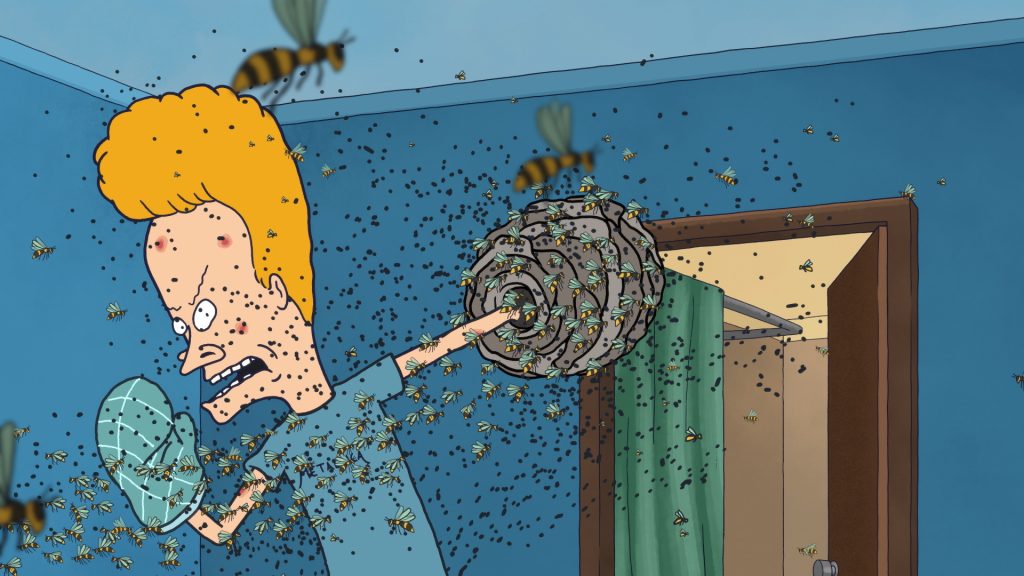 Fans of the ‘90s dim-witted duo Beavis and Butt-Head are experiencing something of a renaissance. Not only did we get the original series on Paramount Plus, but we also got the new feature film Beavis and Butt-Head Do the Universe (which I reviewed earlier this year). Now, we are getting a brand-new rebooted series which seems to be coming out weekly, and the first two episodes debuted on Thursday August 4.

I am someone who was the prime age for Beavis and Butt-Head during its later run-on MTV. It cannot be overstated that long before South Park and Family Guy, Beavis and Butt-Head felt truly cutting edge and even a bit dangerous. Even after the show was slightly re-tooled and softened after a few so-called copycat incidents, the show still retained its edge. This is in large part due to Judge’s trademark wit which savagely lampooned pop culture and society at large. The show was at its best when it mocked consumer culture, even when it became the very thing it was laughing at.

Much like with Beavis and Butt-Head Do the Universe, I was curious about how the series would change and adapt to a very different world both culturally and technologically. If the first segment of the first episode titled “Escape Room” is anything to go by, I think fans like myself are in safe hands. The plot is simple: as the title suggests, the moronic duo join an escape room, only they end up in a men’s room instead of the mummy-inspired room. Hijinks ensue. “Escape Room” is a nice foray into modernity in terms of trends and polished animation (but still in the same slightly rough look), yet it very much feels like an outrageous classic outing. Beavis as a toilet paper mummy is perfect, no notes.

The next segment, titled “The Special One,” is certainly the weaker of the two segments. Beavis, in a rare solo story, finds a literal dumpster fire which begins to talk to him. Instead of commanding him to do “cool” stuff, the fire demands that he do various good deeds. First, I want to point out, this is interesting because infamously fire was the one thing banned from later seasons of Beavis and Butt-Head because of the aforementioned “copycat” incidents that took place. The segment is maybe the first time they’ve gone this fantastical concept-wise, as much of the entire series is grounded in reality. My problem with this wasn’t that Judge was taking the show in a more surreal area, it’s that the overall story and punchline felt lacking of any real “flare”.

Old school Beavis and Butt-Head were known for doing hilarious commentary for music videos. Oddly enough, the first episode we get two YouTube based videos which I feel conflicted about. Although, I should note both of these were funny as hell, so I guess I can let it slide. Then, finally, we get a music video, which is hilariously written, as it’s a crappy country music video. This certainly was a highlight for me. I wonder if the lack of music videos comes down to a budget issue.

The second episode begins with the segment entitled “Boxed In.” As the title suggests, the pair get stuck inside a cardboard box. Much like “Escape Room,” this is a one sentence premise that feels very much at home in the old series. There are a lot of funny exchanges, and I love how most of the action takes place in a tight space. The punchline is also very satisfying.

The second segment of episode two is “Beekeeper.” This is great because here Judge is completely in his element. The hippy teacher Mr. Van Driessen (also voiced by Mike Judge) is featured, and I love how the farmers market offers up plenty of chances for social critique. Here Judge is flexing his social commentary muscle to full comic effect, and I couldn’t be happier. The “stinger” to the segment is savage, and side-splittingly hilarious in the vein of classic Beavis and Butt-Head of the ‘90s.

This episode we get a ASMR video, which really was the highlight of the video segments. We later get a K-Pop video from BTS, which apparently Beavis is a big fan of, much to Beavis’s dismay.

Overall, episode two is the stronger and consistently better episode. I have high hopes for the rest of the season, as this is a very solid start.

Beavis and Butt-Head is currently streaming on Paramount+.