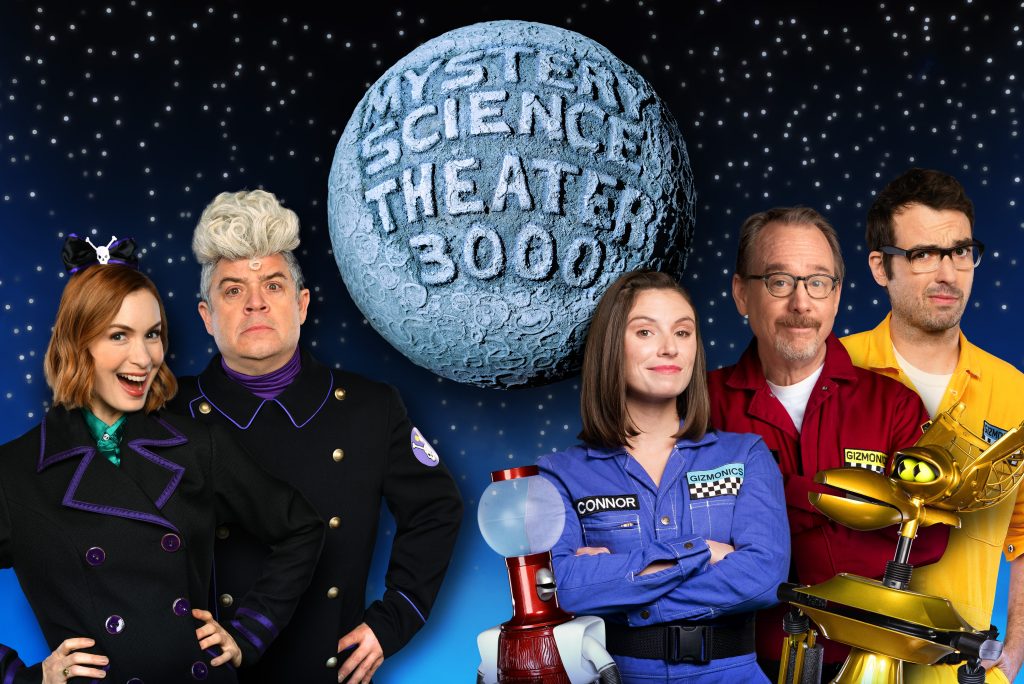 There is a reason Mystery Science Theater 3000 has remained popular for over three decades now. Underneath the robots and silly sketches lies an unabashed love for movies – especially those that might not be as well known or respected by mainstream moviegoers. And it’s that love that shines brightest in the show’s newest season – its first since going fully independent after a wildly successful Kickstarter campaign. This season, Jonah (Jonah Ray) and the ‘bots (Baron Vaughn, Hampton Yount) enter the Gizmoplex, the first cineplex on the moon and the latest development in Kinga Forrester (Felicia Day) and Max’s (Patton Oswalt) quest for world domination. And based on the first two episodes, we’re all in for quite a treat as the new season hits the ground firing on all cylinders.

First things first, some general thoughts. The first two episodes are so funny. The jokes land more often than they don’t, the host segments are delightfully silly, and the riffing feels very natural and gives the performers a chance to properly play off of one another. This time around, the riffing is spaced out a bit more, and it comes as such a welcome change. It’s far easier to hear the dialogue and actually engage with the movie when the jokes are spread out like this. And being able to better engage with the movie often makes the jokes funnier too. The whole experience harkens back to the early days of MST3K where watching the show felt like you were watching a cheesy movie with a bunch of your friends and gently making fun of it. Which is exactly as it should be.

Visually, you can tell this season had a tighter budget – in a good way, though. The set design perfectly straddles the DIY nature of the show’s original run and the higher-budget nature of its Netflix revival. Overall, everything just feels a little less polished and a little rougher around the edges – in the best way possible. It really does feel like a group of friends just gathered together to put on this silly little show. And that’s the kind of MST3K I love the most. The show still delivers some delightfully quirky visual jokes, and it’s easy to get caught up in the sheer joy these actors radiate. Aside from a few technical bumps that’ll iron out as the season progresses, there’s plenty here to adore. Overall, this is peak MST3K – endlessly creative, and gut-bustingly funny.

Episode 1301 – Santo in the Treasure of Dracula

Easily my favorite of the first two episodes, Santo in the Treasure of Dracula feels like an instant classic. It’s got everything you want in a good MST3K episode – a bafflingly strange movie, questionable dubbing, and plenty of room for some brilliant ringers. Without spoiling the movie, the whole thing is so surreal on its own that you almost don’t need the riffing. That being said, though, I can’t count the number of times I laughed out loud while watching this episode. I mean some of those riffs were just slam dunks in the best way possible. Plus, the host segments towards the middle of the episode perfectly play off some of the film’s quirkier aspects. All in all, a perfect example of MST3K firing on all cylinders – and one of only a handful of MST3K episodes I’ve ever had an urge to immediately rewatch the moment I finished it.

Robot Wars, on the other hand, didn’t quite work as well for me, though it’s certainly not a bad episode by any stretch of the imagination. The issue here is that the movie itself just isn’t as fun to watch as Santo in the Treasure of Dracula is. Even with the (surprisingly solid) stop-motion animation, Robot Wars is more boring than it is entertaining. And there’s only so much heavy lifting the riffing can do. With that said, the writers easily did the best they could with the material they had to work with. And there are plenty of brilliantly funny moments, resulting in an overall enjoyable episode. It’s just not quite as successful as the first episode. But then again, your mileage may vary – as is often the case here.

The bright spots, for me, were the host segments, which ended up being extra silly this time around. And some of the (lightly) serialized elements have me quite excited for the rest of the season. So, on the whole, a solid episode that probably works better if you don’t watch it right after you watch the first episode.

Overall, if these first two episodes are anything to go by, fans of Mystery Science Theater 3000 are in for quite a treat with the rest of the show’s 13th season. The movies are silly, the jokes land well, and the cast all seem to be having an absolute blast playing off one another. With these episodes, everyone hits the ground running, promising an endlessly creative and absolutely hilarious rest of the year. And given everything that’s still to come this season – a brand new host (Emily Marsh), a new Crow (Kelsey Ann Brady) and Tom (Conor McGiffin), and the return of Joel Robinson as a proper test subject in the season finale – there’s a lot here for fans to be excited about. As a MSTie myself, I adored every minute of these episodes, and I can’t recommend them enough.

Season 13 of Mystery Science Theater 3000 premieres on May 6 on the Gizmoplex. For more information, visit MST3K’s official website.