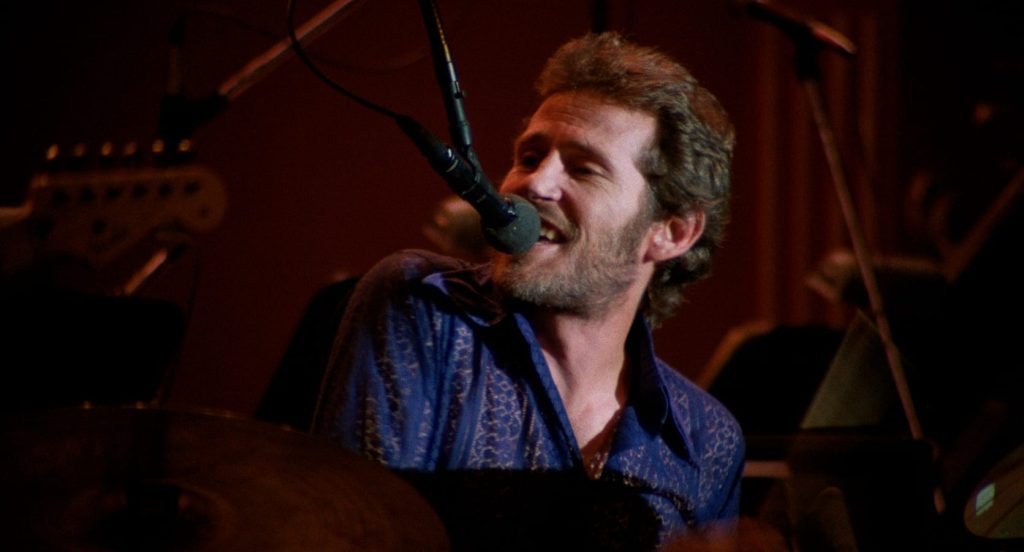 Without question, Martin Scorsese’s The Last Waltz is considered the gold standard of crafting a landmark concert film. The film documents the Thanksgiving Day 1976 farewell performance of The Band, a group that had a solid decade of hit albums and critical acclaim before it all came crashing down. While the movie stands alone as its own special bit of magic, there are two features from recent years that help give greater context to this experience. For newcomers, Once Were Brothers: Robbie Robertson and The Band gives you a nearly-complete picture of The Band, their rise and fall, and the legacy they left behind in a relatively short time. The other film is more precarious but nonetheless informative; Rolling Thunder Revue: A Bob Dylan Story By Martin Scorsese finds the director playfully shaping the impressive archival footage with its subject. While far more straightforward, and truthful, than the Dylan doc, The Last Waltz finds The Band cementing their legacy on celluloid in a very considered way.

While Scorsese primarily lets the performances do the talking for the majority of the runtime, there are some illuminating interviews interspersed throughout with the band members. The man doing most of the talking is Robbie Robertson, the member who arranged for Scorsese to film this finale and shared his cinematic vision for what The Last Waltz should be. There are moments of levity shared between the group and the director, but there is an underlying sense that this was all a long time coming. There is a belief that musicians are a rare breed who should keep chugging away and leave it all on the stage until their number is up. It is easy to forget that these talented beings are only human, and you can feel it in Robertson’s voice that the touring life just might kill him if it were to continue for even a few more years. This sentiment is not necessarily shared by all, which might account for the disparity in interview availability from all. The Band has already lived quite a life, and they are just trying to make the most of their swan song. 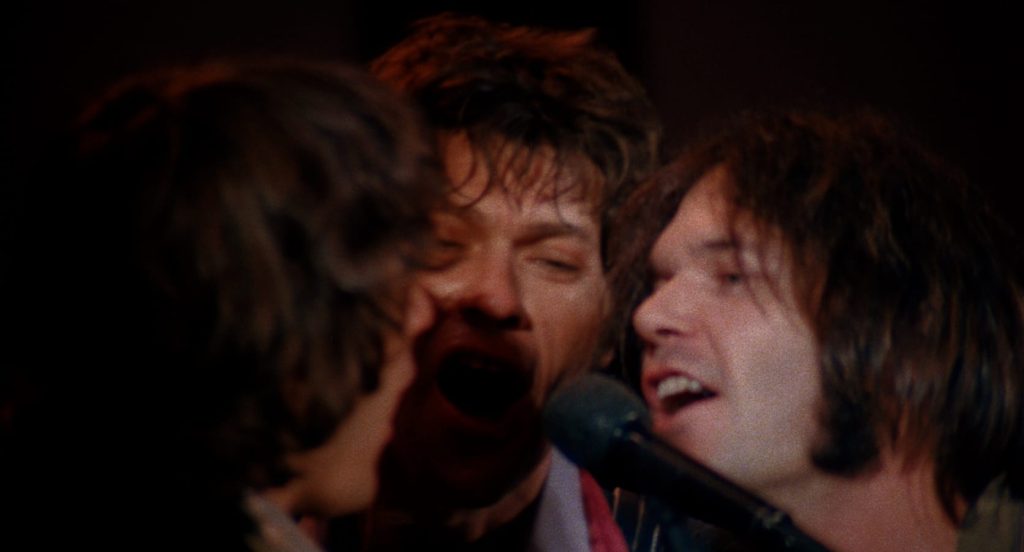 For all the greater context of the event, the performance itself is the draw of the film, and it does not disappoint in the slightest. In a bit of creative editing, the film actually begins with their last song of the evening, a rendition of Marvin Gaye’s “Don’t Do It” that serves as a parting gift for all who have stuck around. Opening with an utterance of “We’re gonna do one more song, and that’s it” brings the idea of finality to the forefront. With a horn section in tow, the band rips through many of their most memorable songs such as “Up On Cripple Creek,” “The Shape I’m In” and “The Weight.” While never lacking in their recorded form, these tunes are given a renewed vitality as this creative force of nature bands together for one final moment. Even a less rollicking number such as “It Makes No Difference” is given a deeper pathos through its raw delivery. Debatably, the crescendo of all of these elements comes in the form of the almost-spiritual rendition of “The Night They Drove Old Dixie Down.” Levon Helm gives his entire self over to bringing these lyrics to life while backed with a collection of instruments that have never sounded better together. This is live music at its finest.

It’s not a proper farewell without getting together with some of your friends, and The Band just so happens to have some of the most talented friends in the business. Some names hold more cultural cache than others, but all are essential to showing off the many facets of this group. An appearance from Ronnie Hawkins will mean more to those who know his history with The Band as explored in Once Were Brothers. This full-circle moment comes with a down and dirty rendition of “Who Do You Love?” that brings up the energy of the room. The version of “Coyote” we get from Joni Mitchell is much different than the intimate backstage performance from Rolling Thunder. Mitchell’s voice is full-bodied and effortlessly cool as the sounds swirl together with such beauty. Appearances run the gamut from Muddy Waters to Neil Diamond, but no one feels out of place in this grand celebration. 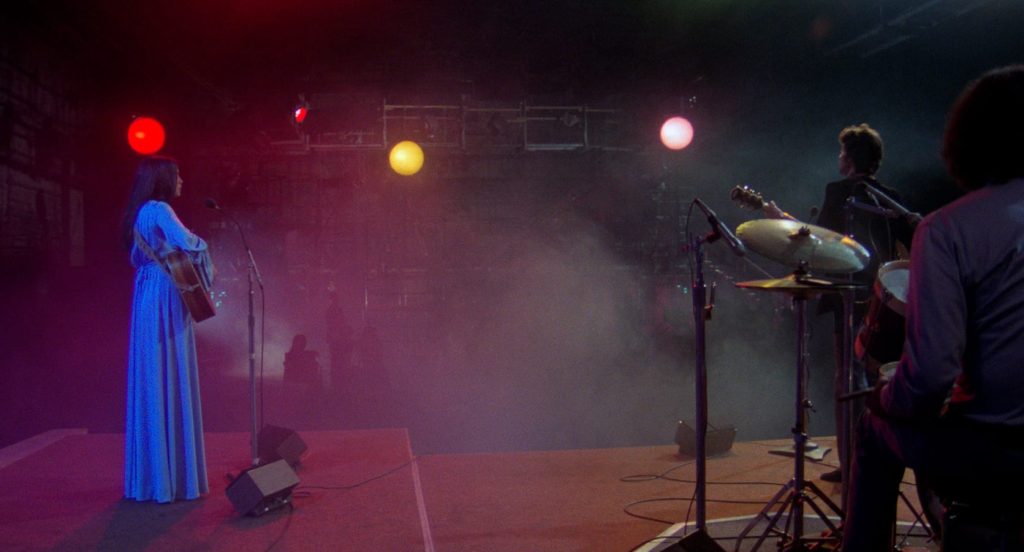 While some songs may be tougher or grander in scale, the actual finale of this journey could not be more satisfying. Bob Dylan was so essential to the legacy of The Band and their cultural permanence, so it is only fitting that he come and walk beside them into the sunset. Dylan and The Band, along with pretty much every other guest in the building, perform a transcendent version of “I Shall Be Released” which thematically magnifies everything that is contained within this moment. This band has been through so much personally and professionally, and it is time for them to rest. At least, that is what is nice to believe as we leave this picture unmoored by the truths of the subsequent decades. Scorsese has made a perfect narrative out of a real-life milestone. It would have been easy to just capture a concert, but the deliberate choices made within the filming and editing gives the feature its personality which serves as the definitive document on The Band. 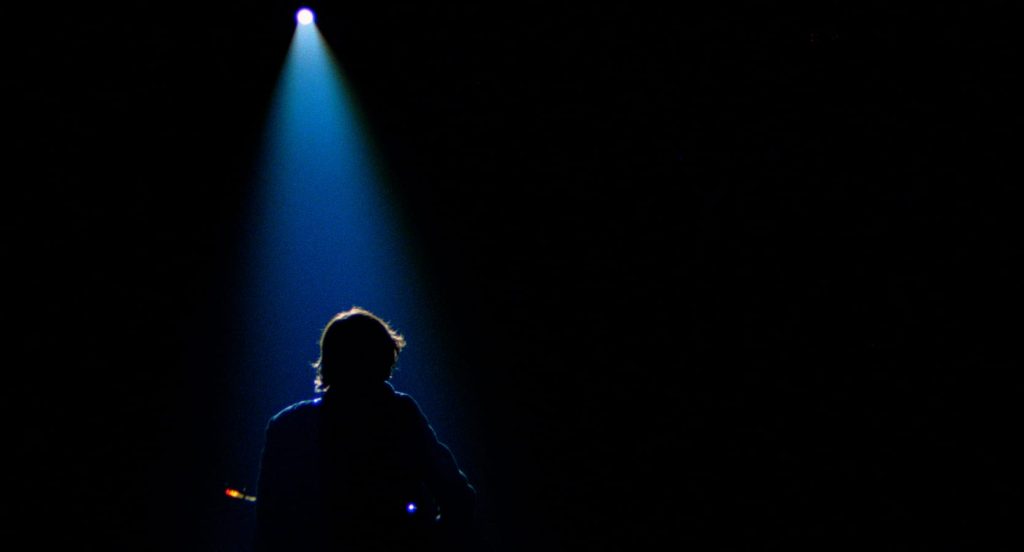 The Last Waltz comes to 4K UHD Blu-Ray with an impeccable looking transfer that blows the old MGM disc out of the water. The Criterion Collection presents the film with a miraculous 2160p Dolby Vision transfer sourced from a new 4K digital restoration of the 35mm Original Camera Negatives. This is the type of release you never would have dreamed of getting a true 4K release, but now that it is here it ranks among the strongest of the format. The film features some nuanced colors within the outfits and stage design that pop off the screen with a vibrant intensity. The Dolby Vision offers a depth and stability of color that is frankly awe inspiring. You only need to take a look at any of the stage lighting and how it interplays with the smoke to see what a stunning sight this presentation is overall. The same could be said of the natural tones that present with an immense complexity in some of the roaming shots of the city. The black levels are simply perfect with nothing in the way of crush present, and white levels are solid as a rock with no trace of blooming.

The level of detail and clarity is stunning with the appropriate amount of natural film grain intact. The grain resolves quite well without ever being clumpy or unsightly. The texture on display in the outfits and within the stage design are a revelation. Even facial details like the sweat of the performers present with impressive clarity. This presentation is true to the original look of the film without the added resolution making any settings seem out of place. The film is entirely free of dirt and damage, which makes the feature feel like it captured an event you could have attended yesterday. There does not appear to be any jarring digital anomalies such as compression artifacts, banding or any other such nuisances. This presentation is an award-worthy effort from the team at The Criterion Collection.

This 4K UHD Blu-Ray comes with three excellent tracks; first up is a DTS-HD 5.1 Master Audio track remixed from the original two-inch magnetic masters in 2001; next up is an LPCM 2.0 stereo track from 2001; and finally we have the DTS-HD 2.0 Master Audio surround track from 1978. Each track adds its own unique flavor to the experience that provides an expertly designed audio experience. Music is the driving force of the film, and it comes through in a warm and vibrant manner without any instances of age-related wear and tear or damage. Many of these songs are performed with an intensity that allows them to sound better than the recorded versions, and this is showcased perfectly here as the music fills the room. Scorsese and company do a really great job of capturing the interview subjects and making sure all of the dialogue comes through with supreme clarity. Even the most bustling footage allows for some subtle moments that do not get lost in the mix. The chatter backstage or throughout the crowd provides a nice base texture to the proceedings. Ambient sounds from night time picnic table discussions are precisely placed in the rear channels. These audio tracks are working on many different levels with disparate elements that come together to create something quite magical. 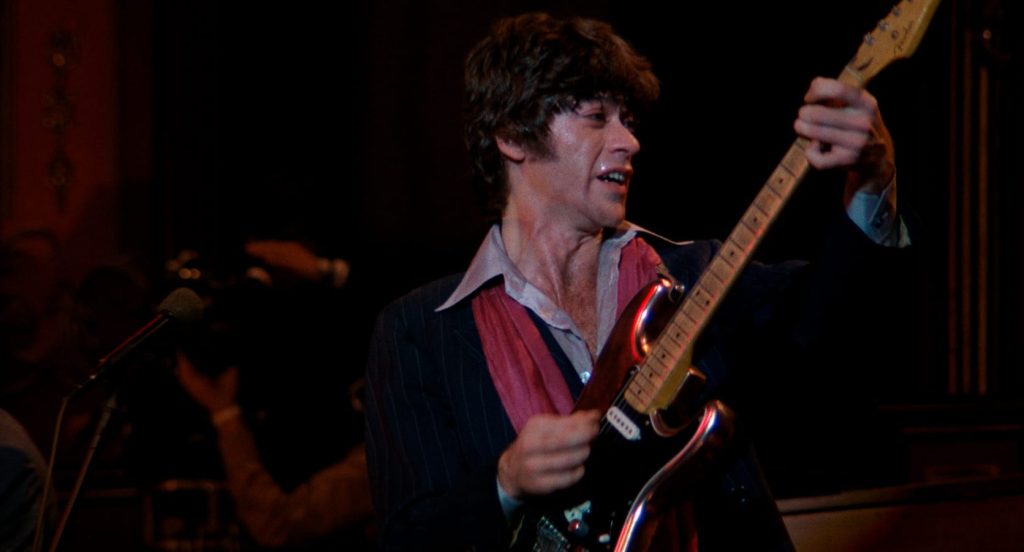 The Criterion 4K UHD Blu-Ray of The Last Waltz includes a foldout booklet featuring the essay “Long, Hard Road” by author Amanda Petrusich which provides a great amount of context and insight into the film and the original circumstances around the show that is so worthwhile. The on-disc special features are as follows:

The Last Waltz is one of the most moving music performances ever committed to film. The feature is not simply a band playing great music, but also an event loaded with emotion and thematic weight that elevates the material to something essential. Martin Scorsese shows his command of the camera even when he is not shooting a straight narrative, somehow finding the exact moments that create an indelible image in your mind. Even beyond the artistry of the film, these are simply incredible songs that sound better than any studio can capture. The Criterion Collection has delivered a new 4K UHD Blu-Ray that offers a 5-star A/V presentation and some very cool special features. If you are not already a fan of The Band, I have a feeling you are about to become one. Essential

The Criterion Collection edition of The Last Waltz will be available to purchase on March 29, 2022 on 4K UHD, Blu-Ray and DVD.