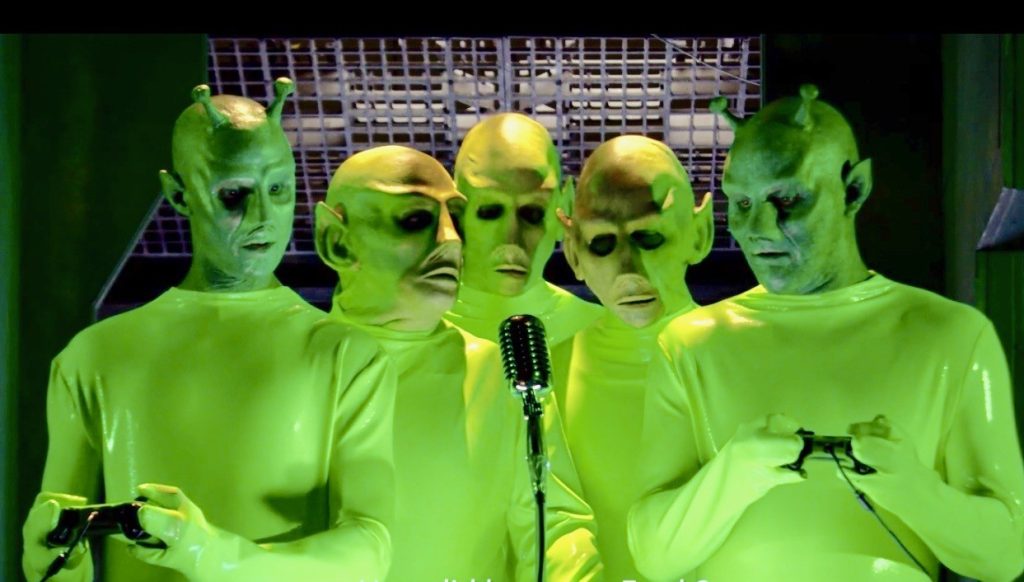 Out-of-work actor Eddy Pine stumbles upon the key to the universe and is drawn into an intergalactic conflict between killer clowns and sneaky green aliens–the fate of the planet hangs on the outcome. And thus begins a “wild, wacky comedy” (Horror Buzz) filled with hilarious twists and turns in this “fantastical sci-fi adventure!” (Bloody Disgusting)

For thoughts on Aliens, Clowns & Geeks, please check out our discussions on The Video Attic:

Aliens, Clowns & Geeks debuts on Blu-Ray with a spectacular 1080p presentation in 1.78:1 from a high definition master that captures the film incredibly well. The project has a bold, vibrant color palette that pops off the screen consistently while showing off an impressive amount of detail and clarity. There may be a hint of slight banding in certain shots, but it is not pervasive throughout. Despite being fairly low budget, it never ceases to dazzle with how sleek the film looks even with the occasional variances in aesthetics from the different locations. The bright whites do not show off any instances of blooming. Black levels hold up nicely as they appear with great depth. Objects hold up well in the shadows and retain their depth. The special effects are executed well considering the limited budget they had to pull it off. Overall, this is a really solid disc that showcases the work well. This presentation is definitely a winner from MVD Entertainment.

The Blu-Ray disc comes with a DTS-HD 5.1 Master Audio and LPCM 2.0 track that brings this environment to life perfectly. This movie is at its best when it is having fun with its sound design. The environmental effects are delineated nicely with some otherworldly sounds and ambient noises on display. The dialogue holds up quite nicely, coming though clearly without being stepped on by the music or sound effects. The terrific score maintains a strong fidelity and comes through the room really purposefully. This is a track that represents the film in a very satisfying way. Optional English (SDH) subtitles are provided on this disc. Aliens, Clowns & Geeks is a testament to weird and wild independent filmmaking that does not have to answer to corporate overlords. The comedic sensibility is not one that I personally connected with, but those who come to the film with a preexisting appreciation for Richard Elfman will probably have a lot more luck. The movie is gleefully stupid, but purposefully so. All of the performers are obviously having a blast, and the raucous atmosphere creates good vibes even when some bits are a miss. MVD Entertainment has released a Blu-Ray that has a terrific A/V presentation and some great special features. If you are a fan of the talent involved, it is worth a watch to see how it works for you.

Aliens, Clowns & Geeks is currently available to purchase on Blu-Ray and DVD.

Disclaimer: MVD Entertainment has supplied a copy of this disc free of charge for review purposes. All opinions in this review are the honest reactions of the author.