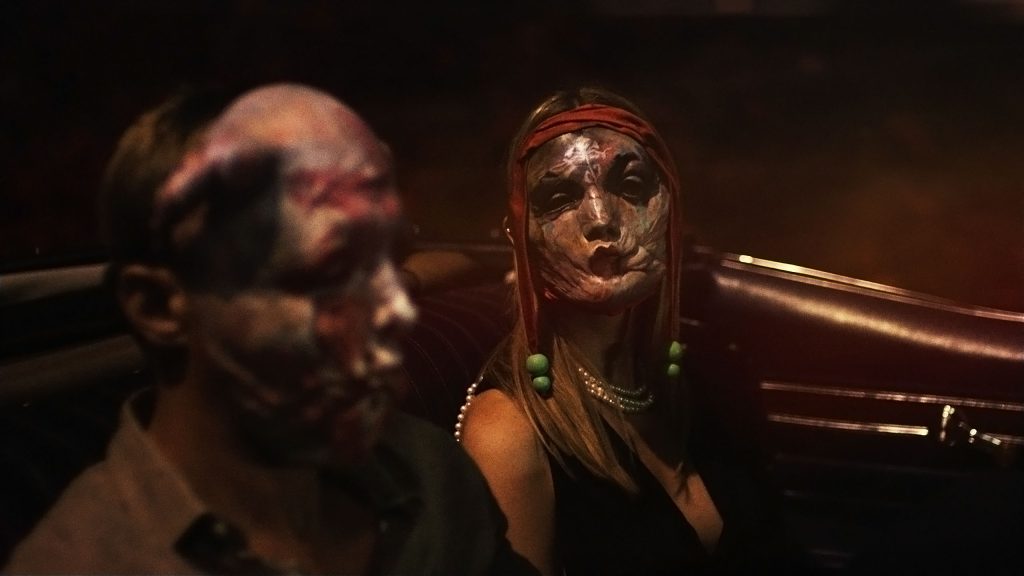 Terrible rich people are having a moment.

We always have, for reasons as varied as aspirational pursuits to joyous schadenfreude. Recently, Hollywood has been preoccupied with unpacking why on the big and small screen. Succession, The White Lotus, The Menu, and fresh Best Picture Oscar nominee Triangle of Sadness cracked the zeitgeist by skewering the rich and powerful and interrogating the impact of their influence. You could get lost in the woods exploring every possible theme in the “terrible rich people” genre and uncover plenty about societal decay, parasocial idolatry, the ever-widening gap between the classes, and exploitation, among others.

And then there is Infinity Pool, the third feature from horror film royalty Brandon Cronenberg.

Infinity Pool follows author James (Alexander Skarsgard) and his wife Em (Cleopatra Coleman) on their resort vacation in the fictional country Li Tolqa. While James tries to work on his second book and ignore his insecurities about how he relies on Em financially, the couple encounters Gabby (Mia Goth) and Alban (Jalil Lespert). The couples become friends and, despite strict hotel policy, venture outside the compound for a day of dangerous exploration. Their day ends with James accidentally killing a local farmer with his car and getting arrested by the authorities. In place of a death sentence, Li Tolqa allows its wealthy tourists to pay for the government to execute a clone in their place. The cloning and death sentence experiences ignite something sinister inside of him, and Gabby uses it to lead him down a path of lawless debauchery.

Even with the grotesqueries on display, Infinity Pool is surprisingly watchable. Cronenberg puts a lot on screen but doesn’t strive to overwhelm the senses. There’s as much shock in what’s obscured or glimpsed at versus what we actually see. He captures spilled bodily fluids landing on various surfaces with morbid curiosity and disturbing beauty. He casts the most explicit sex scenes with a neon glow that softens his shocking flashes of flesh. The film’s establishing shots suggest danger and malice but don’t disorient the way you might expect. The accessibility extends to Cronenberg’s plot. The script certainly lends itself to overthinking where the story’s direction and the reality of what’s on screen. You’ll debate yourself throughout the film about who James really is. However, you realize that those questions are beside the point. There is no byzantine twist; what you see is what you get.

But what does Infinity Pool offer beneath the rushes of blood, sweat, and sexual fluids? The film plays in the sandbox with other eat-the-rich dramas and thrillers, presenting Gabby’s motley crew of wealthy tourists as raging narcissists with hard-ons for indiscriminate carnage. Their reckless abandon feeds James’ brittle ego, allowing him to ignore his fears of inadequacy and mediocrity by exacting brutality on others. The film tracks his descent down the perverse rabbit hole but doesn’t examine the journey’s meaning. James rarely has a moment to respond to his increasingly messed-up experiences. What does it mean to him that he’s sinking further into this debaucherous muck? Does he care? The lack of emotional or psychological introspection –  critical for a film seeking to operate on a higher level than shock – leaves everything around James feeling empty.

Cronenberg’s script may be slight, but Alexander Skarsgard and Mia Goth still tear chunks out of it. Goth continues her scream queen dominance with a scenery-chewing performance that never ceases to be unsettling and even sexy. (Gabby offers as much camp appeal as Pearl does; prepare for the memes.) As memorable an image of him on a leash is, Skarsgard gives much more than that. He practically plays against type, undercutting his imposing stature with tentative looks, uncertain movements, and simpering tones that expose his fragility. Skarsgard also embraces his character’s hedonist impulses, participating with a glee that captivates and unsettles.

Infinity Pool slides nicely into the recent canon of rich people doing terrible things. It is one of the most visually and narratively accessible films from the Cronenberg family, with top-notch performances from its cast. However, it may be too easy to connect with, sacrificing the challenging insight you would expect from everyone involved. Once the initial shock of blood and semen wears off, Infinity Pool boils down to “no thoughts, just vibes.” Watchable vibes, but still just vibes, which don’t feel like enough for this particular moment.

Infinity Pool had its World Premiere in the Midnight section of the 2023 Sundance Film Festival.

Once the initial shock of blood and semen wears off, Infinity Pool boils down to “no thoughts, just vibes.”