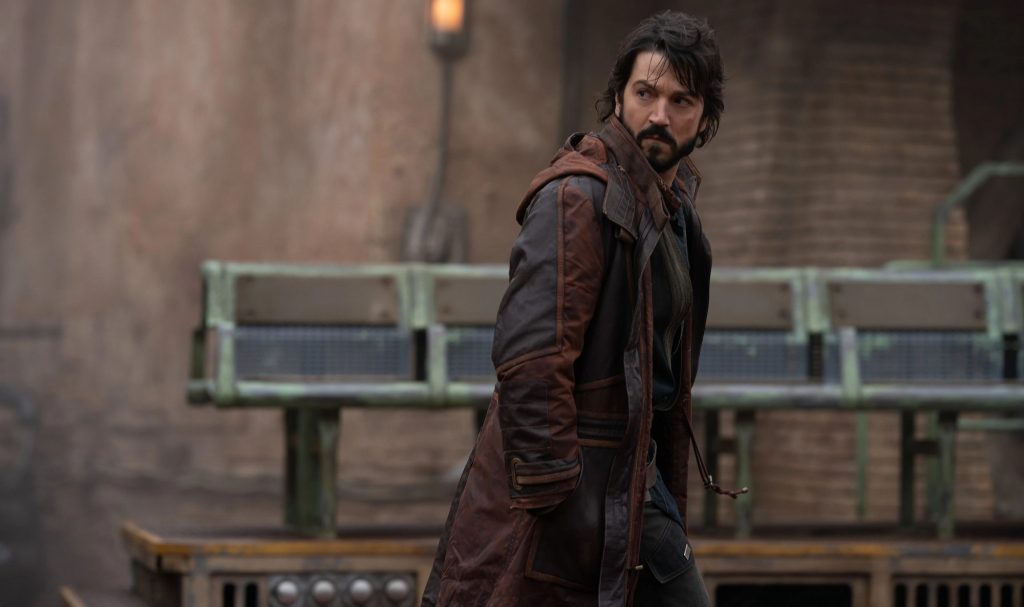 Andor does something important with Rogue One’s lore much like what Clone Wars did with the original prequel trilogy of films – it expands the story of Rogue One as a prequel in a really substantial way. focuses on the burgeoning days of the rebellion, set before in the period before but after the events of Revenge of the Sith. The new series builds upon what we learned about Cassian Andor (Diego Luna), the main protagonist who is our conduit to explore the darker side of the Rebellion, one in which the lines between right and wrong are as blurred as they have ever been.

To understand the mindset of this complex character and expand on what we know of him and the world at this time, we are left in the hands of the great Tony Gilroy (Rogue One, Michael Clayton), who delivers in spades! Not only do we delve further into Cassian’s complex inner-workings which created the character we fell in love with in Rogue One, we begin to truly understand the full scope of the Rebellion – not just the good, but also the more gritty, morally muddy facets. Gilroy also delivers exciting explorations of the Empire. As we know, the Empire really hasn’t been explored in a live action setting. The only time we got extensive development from the empire were in the novels, like Catalyst, Tarkin, and the Thrawn novels, so seeing the empire get a lot of screen time is exciting.

We see Mon Mothma (Genevieve O’Reilly) play a more active role with the creation of the Rebel alliance. Even from her early days as part of the Senate alongside Padmé Amidala and Bail Organa, she has always been a character who has piqued our interest. In the past, we understood how important her role was for the rebellion, but we really haven’t seen her so as proactive until Andor. At this time, she is still part of the Senate, but we get to explore her efforts to grow the rebel resistance. Cassian Andor is likewise more fleshed out from Rogue One.

In that film, we see Cassian kill one of his own for the survival of the rebellion; that is something we had not seen in up until this point. To see that darker side of the rebellion, is refreshing. We also get a good amount of new characters that help expand Cassian’s development within the series. Characters like Bix Caleen (Adria Arjona) who represents Cassian’s past as someone that was protective or perhaps something more. Although, Bix is used for more than Cassian’s development; she is too dynamic to be stuck in a passive role, much like other side character in the series.

Bix is someone the feels responsible for not just herself but for others as well. She is used like a big sister to Cassian, but the true extent of their relationship is one of the more interesting threads to explore. Even outside of Cassian, you can tell the entire neighborhood respects Bix for the way in which she carries herself. She has her own wants and needs, but usually puts others first almost to a fault.

While Bix may have a more direct impact on Cassian, Dedra Meero (Denise Gough) is another new face who has a major impact in a much more abstract way. Dedra wields her power by affecting the world surrounding Cassian. Dedra is a new high ranking officer within the early days of the Rebellion, climbing her way up in a male dominated government.

Within her first episode we understand that she still works by the books, she is a perfectionist and she is incredibly devoted to the empire in way that it is scary. We get additional well-developed characters in the empire and rebel alliance, but the secrets of those characters are best preserved until when we all meet them September 21. When it comes specifically to the look of the series, Andor is the best Star Wars-related property to come out in recent years. Aesthetically, all of the Star Wars series have looked great from The Mandalorian to Obi-Wan Kenobi, but there is something that Andor has over those series: it’s not contained to the on-set environments.

Where The Mandalorian, Book of Boba Fett and Obi-Wan Kenobi used the incredible stagecraft technology, Andor focused more on on-location filming rather than using Volume. It proves that shooting practically on-location is still the superior style of filmmaking, even if it might be more expensive – it is more than worth it.

Hopefully going forward Star Wars utilizes on-location filmmaking more than Stagecraft technology, as that style of filmmaking is more organic to the Star Wars lore more so than relaying heavily on CGI. That’s not to say we should abandon CGI completely; it has its advantages, of course, especially for space battles. Andor really goes back to its roots, and it is rewarded with being one of the best looking shows of the year!

Andor is the best Star Wars series that Disney Plus has produced to date, which is saying a lot because The Mandalorian has been killing it with both seasons and the third season looks like it’s going to be mind blowing. But right now, Andor doesn’t rely too heavily on cuteness – Grogu – or massive cameos – Ashoka, Luke, Bo-Katan, or even Boba. This is purely a great story built with mostly new characters that expands on the lore of Star Wars.

I might even say this is in my top 5 series of the year! While we only have the first four episodes to judge for now, so things can conceivably go bad, for now it’s a spectacular show that will stand as a high point for the small screen adventures.

Andor will premiere on Disney+ on Wednesday, September 21 with the first three episodes with weekly episodes to follow.